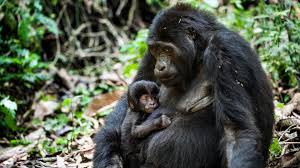 Uganda the home to more than a half of the world’s critically endangered Mountain Gorillas has at many times offered lasting experiences for the Uganda gorilla safari undertakers but the memories gathered by Dina Tamimi will forever be beyond the ordinary.

In Mgahinga Gorilla National Park the second destination explored by travelers on gorilla safaris in Uganda after Bwindi Impenetrable National Park, there thrives one habituated gorilla group named Nyakagyezi and it is in this family that one of the unique Mountain Gorilla experiences occurred.

The female Cyizanie gave birth to a lovely bouncing baby gorilla at such an opportune time when the American citizen traveler based in United Arab Emirates had arrived for Mountain Gorilla viewing as part of her Safari in Uganda. It was a big surprise as it wasn’t known that the female gorilla would give birth. Such unique moment had last occurred in the year 1998.

Led by Mark – the dominant Silverback, Nyakagezi gorilla group now features a count of eleven (11) members. Uganda has had series of births this year in her two Mountain Gorilla habitats namely; Bwindi Impenetrable and Mgahinga Gorilla National Parks. Rushegura and Bushaho Gorilla Groups have also had most recent birth in the north and south of Bwindi Impenetrable National Park – the prime destination for gorilla trekking safaris in Uganda respectively.

It can be noted that a count of 880 Mountain Gorillas are known to be left in the world living in only three countries of Uganda, Rwanda and Democratic Republic of Congo.