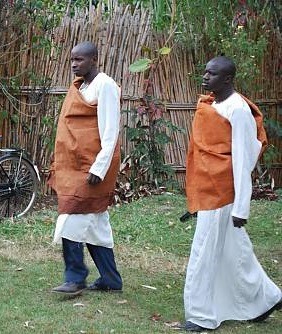 Uganda is indeed the pearl of Africa as described by the British premier in the year 1908 on his safari tour in Uganda at the time. Considering her range of bio diversity in terms of fauna and flora, birds along with impressive scenic landscapes and vast water bodies coupled with the diverse and yet harmonious tribal groups that thrive in the country, Uganda indeed qualifies for the maiden title and lucrative position on the tourism market that would enable it attract a range of world travelers to undertake safaris in Uganda.
Apparently with reference to the amended constitution of the Republic of Uganda 2005, Uganda has 65 tribal groups most of which vary in traditions and cultural setting. These tribal groups are spread across the country with alignment to the north and south of the Nile. The northern Nilotic groups and the southern Bantu groups all have impressive traditions that can be encountered on Uganda safari.
Considering the south western forest tribal groups of the Batwa Pygmies which are among the last surviving groups of short people in the world and stretching to the nomadic Karimojong who are known for their ancient nomadism and distaste for clothes to the Indigenous Karimojong tribe which is endangered and dwelling in the mounts of Morungole in the north east of Uganda to the large tribal groups of central Uganda namely the Baganda with their established monarchy and rich heritage hardly found anywhere else to the Banyankole pastoralist groups famously known for their Ankole long horned cattle to the Bamasaba on the slopes of Mount Elgon famously known for their circumcision (Imbalu) for males and the female genital mutilation among the Sebei (but now abandoned) to the Nilotic Acholi and Langi groups in the north of the country with their famous dances among other groups, Uganda’s heritage and cultures stand with great potential to increase the number of travellers that undertake Uganda safaris and tours.
The development of these cultures along with their heritage for tourism development will enable the country to diversify from the traditional products of gorilla trekking safaris, chimpanzee trekking safaris, wildlife safaris in Uganda thus creating a rich tourism base that will push the industry to greater heights and enhance the visitor stay wile on their safari tours in Uganda.
Uganda safaris/Uganda safari News
Prime Uganda safaris & Tours Ltd