Yesterday, Sunday 1 December 2019, Uganda’s Joshua Cheptegei set a new 10K road world record in Valencia Trinidad Alfonso winning a price of 40,000 euros. Chepetegei joyously crossed the line stopping it at 26 minutes and 38 seconds. Joshua Chepetegei beat the previous record, set by Kenya’s Leonard Komon in 2010 by six seconds. Cheptegei’s average pace was two minutes and 40 seconds per kilometre, passing through the halfway point in 13 minutes 24 seconds. Kevin Kibet came second in 28:19 as Cheptegei was cheering with the flag while Swede Reza Abootorabi was third in 28:35.

2019 has turned out to be a memorable year for Chepetegei as he was crowned 10,000m world champion in Doha in October, having won the 10km cross country world title in Denmark in March. Speaking to one of the journalists, Cheptegei said, “What a year it has been. I can’t believe it. I knew that Valencia was going to be a really fast course, one of the fastest in the world. So to get to achieve what we came here for is something really special.” In an Instagram post, the runner wrote, “It’s a special moment to crown the year with yet another important achievement. What a year 2019 to end with a 10km #worldrecord”. He then went on to thank his family, pacemakers, and coach and training partners.

In this way, the NN Running Team athlete obtains the triple crown by completing a circle of victories in a year in which he has also been crowned as World Cross Country Champion in Aarhus (Denmark) and as World Champion of 10.000m (on track) in the recent World Championships in Doha, Qatar.

In relation to Uganda’s great runner like Stephen Kiprotich, Moses Kipsiro, Boniface Kiprop and John Akii-Bua among others, Cheptegei is now respectably at a higher level.
His triumph meant that the 23-year-old hit all his three targets for this year; the World Cross-country title in Denmark on March 30, the 5000m trophy on the Diamond League on August 29, the 10000m world title on October 6 and now the 10K WR. By taking six seconds off the time Komon ran in Utrecht, Netherlands, Cheptegei now holds two WR having also set the 15K best time in Nijemegen a year ago.

Cheptegei was never the player to beat but he took it upon himself and made it all count during the final lap. The steep climb and headlong descent of the roof of the Moesgaard Museum played a major role in dictating the manner in which the senior men’s race was run and in determining how it finished but Cheptegei defied the odds. 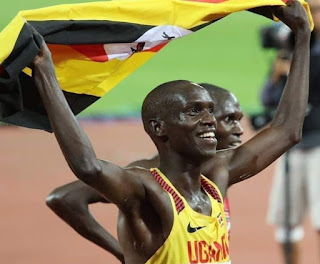 In the final lap, Cheptegei and Kiplimo dashed clear with Kamworor dropping back first five metres, then 10. As the gap continued to grow he clearly could not win a third straight world cross-country title. Right from the onset, four Ugandan vests were seen among the top 10 runners and it ended the same way though in different orders. Another Ugandan, Thomas Ayeko was seventh, with a timing of 36 minutes, 47 seconds while Joel Ayeko clocked 36 minutes, 57seconds to take 10th position.

Other male Ugandan athletes in the mix included Thomas Ayeko who finished seventh and Joseph Ayeko (tenth). Uganda wrapped up the teams’ race as well to compound a very memorable outing for the team from the Pearl of Africa.

How some individual athletes performed:

Joshua Cheptegei demolished a stellar cast featuring three previous winners of the 5000m race to claim Uganda’s first ever Diamond League trophy as well as bag sh185m in prize money. During the race, many tried to, but all failed to stop Ugandan long-distance runner Joshua Cheptegei in his tracks Thursday night as the 22-year-old raced to a historic IAAF Diamond League 5000m triumph in the Swiss city of Zurich. Before that race, no Ugandan had ever won the Diamond Trophy, which comes with a hefty $50,000 (sh185m) prize tag. But in World Cross Country champion Cheptegei, Uganda boasts a gem when it comes to endurance running.

Across the 10 seasons of the Diamond League, the men’s 5000m discipline has been dominated by the Ethiopians, with six of the honours taken by them. The scraps have been claimed by Kenya (two), Great Britain (one) and now a first for Uganda. With about 300 metres to go, the Ethiopians breathed fire, snipping Cheptegei’s lead by every whip forward. On the bend, the Ugandan’s lead had been halved, but he dug deep, drawing out every remaining dollop of energy from his reserves.

Gebrhiwet came in second with a time of 12:58.15 while Kimeli was third with 12:59.05. Ethiopians Haile Telahum Bekele, Barega and Kejelcha followed – in that order.

Take time off your schedule and go for a Uganda safari to the Pearl of Africa. You can book a Uganda safari holiday packages that include Uganda guided safaris, River Nile boat cruise excursions that will be done during 1 Day Jinja tours or Jinja day tours and on boat cruise in Murchison Falls National Park during a Uganda wildlife safari. Popular packages to Murchison Falls Park include; a 2 Days Murchison Park Safari, a 3 Days Murchison Falls Uganda safari and a 4 Days Uganda wildlife tour. Other Uganda tour holiday packages include; unique mountain gorilla trek safaris in Uganda, Uganda chimpanzee trekking safari encounters, Uganda bird watching safaris, and many more. Four and five-star accommodation packages are also included, providing personalized service and pampering.

Alternatively Visit Uganda/ safari Uganda by choosing from one of the holiday packages that have been tailored to give you chance to enjoy Uganda gorilla trekking safaris to encounter Mountain Gorillas, exploit Uganda by booking with us a white water rafting trips down the River Nile; the world’s longest river, or book a Uganda safari trip to experience Uganda’s wildlife in any of its 10 National Parks in a comfortable and safe of 4×4 safari vehicle for hire Uganda, Uganda chimpanzee trekking safari encounters, coffee tours and many more.