On the 2nd day of August 2018, the president of the Republic of Uganda, HE president Museveni received a global peace keeping award. The award comes after a two day conference at Speke Resort Munyonyo that started on 1st August 2018. The conference was themed on “Moral and Innovative leadership news models for sustainable peace and development” with an aim of promoting innovative values-based approach to peace building. 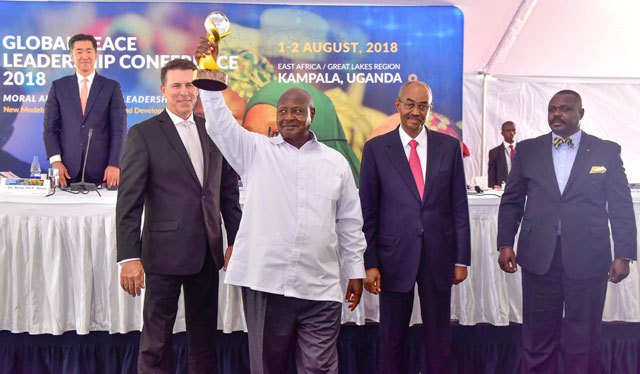 President Museveni received the global peace award for Uganda’s leading role in fostering peace and stability in the great lakes region and Africa at large, awarded to the president for his effort on peace keeping in the country.

Uganda is being recognized because of its regional efforts on peace and security, the resettlement of refugees, and the successful track-record in the fight against HIV/AIDS.  The global peace conference is hosted by Uganda after Kenya (2010), USA (2012), Malaysia (2013), Paraguay (2014), and Philippines (2017). In 2019, South Korea will next host the global peace meeting with the aim of focusing on the unification of Korea and tackling economic imbalances in the world.

Before the awards on Thursday, president Museveni stated that “Africa is partly to blame for the greedy who come and invade it. We need to concentrate on factors that will make us strong. We can’t continue to complain of persecution yet we are sitting on vast natural resources.”

The efforts of the president to keep the country stable comforts those who safari Uganda that their security is surely guaranteed.

The diversity in Uganda

In a country filled with diversity ranging from the rare mountain gorillas, Africa’s finest wilderness, an array of more than 1,057 bird species, Africa’s friendliest people to being the source of the world’s longest river-Nile River and more, Uganda is undoubtably needs to be safe.

The country is blessed with 10 national parks for Uganda wildlife safaris, 12 sanctuaries and 13 game reserves all protecting wildlife. Adjacent to Uganda, her neighbors have increased numbers of tourists going for Tanzania safaris, Kenya safaris and Rwanda safaris because of their stability.

Every reason for a Uganda safari has been given, diversity, hospitality and stability, let your dream safari come true.