UN Secretary Calls for Sustainable Recovery of Tourism From COVID-19

UN Secretary Calls for Sustainable Recovery of Tourism From COVID-19 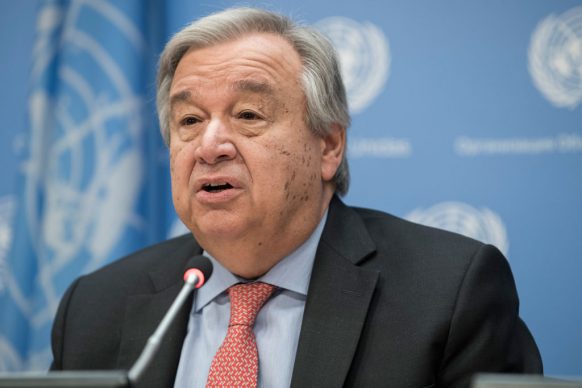 Last week, the United Nations (UN) Secretary-General Antonio Guterres called for a sustainable recovery of tourism as we recover from the COVID-19 pandemic. Speaking to us in a video, Antonio Guterres said; “Rebuilding the tourism sector is crucial. But it has to be in a way that is secure, fair and climate-friendly. He said this during the launch of his tourism policy brief and COVID-19.

He also cautioned that transport-related greenhouse gas emissions could rebound sharply if recovery is not aligned with climate targets.

Supporting the millions of tourism-dependent livelihoods means creating a healthy and responsible travel experience that is secure for host communities, staff and travellers, he said.

He established five focus areas: mitigating COVID-19’s socio-economic impacts, building resilience across the entire value chain for tourism, optimizing the use of
technology in the tourism sector, supporting sustainability and green growth, and cultivating collaborations to further support the Sustainable Development Goals for tourism.
Referring to tourism as one of the most important economic sectors in the world, Guterres said the industry employs one in every ten people on earth, creating hundreds of millions of livelihoods, improving economies and enabling countries to prosper, enabling people to experience some of the world’s cultural and natural resources, and bringing people closer to each other. Hence it was so difficult to see how the COVID-19 pandemic has destroyed tourism, he said.

International tourist arrivals decreased by more than half in the first five months of this year and some US$ 320 billion of tourism exports were lost. Overall, some 120 million direct jobs in tourism are at risk, he noted.

Many job losses occur in the informal economy or micro, small and medium-sized enterprises, which, he said, employ a high proportion of women and youth.

The crisis poses a big shock to developed economies. But this is an emergency for developing countries, particularly for many small islands developing states and African countries.

Tourism has become a tool for integration, empowerment and income-generating for women, rural communities, indigenous peoples and many other traditionally disadvantaged populations.

Tourism is also a crucial feature of nature and cultural heritage protection. The fall in revenue has led to increased deforestation and habitat degradation in and around protected areas and the closing of several World Heritage Sites has robbed communities of critical livelihoods, he said.

Guterres concluded his message by calling for the restoration of the role of tourism as “a provider of decent employment, steady income and the preservation of our cultural and natural patrimony.”

Tanzania is one of the most popular safari destinations on the continent, and it is not just Tanzania’s wildlife safari migration that is wonderful in Tanzania, but it is the wild game of the Serengeti National Park and Ngorongoro Crater that attracts the majority of Tanzanian safari tourists. Tanzania is the best refuge for safari tour travellers from Africa interested in immersing themselves in the African bush’s wonder.

Uganda, Africa’s Pearl is a politically autonomous nation with mild climates, beautiful mountains, flora, and fauna. Uganda is one of the safari destinations in Africa most visited by visitors from all over the world. Choosing a Uganda safari with friends or family is the best option as it will reward you for seeing Uganda safaris made in various Uganda National Parks, birding safaris in Uganda, chimpanzee and gorilla safaris in Uganda as well as other Uganda adventure safaris like fishing, hiking, nature walking, sightseeing, zip-lining, horse-riding.

Rwanda, popular as the land of a Thousand Hills, is one of the most beautiful destinations in Africa that you should visit. With three national parks and many forest reserves, Rwanda has lots of things that amaze tourists during their visit to Rwanda, including stunning mountain, lake and savannah landscapes. Rwanda is home to a varied range of habitats that serve as a home to wildlife that attracts travellers for wildlife tours in Rwanda, as well as home to more than 704 documented different bird species that you’d see on a Rwanda birding safari. The threatened mountain gorilla is the undisputed king of Rwanda and biggest attraction for tourists.

Aside from Uganda and Rwanda, Congo is one of the greatest hidden gems in Africa perfect for African safaris. Congo is the only West African nation with 2 gorilla species; mountains and the lowlands. Congo’s main destinations for fascinating Africa safari adventures include; Virunga National Park and National Park Kahuzi Biega. Located in the provinces of North Kivu and South Kivu, in the eastern Democratic Republic of Congo, respectively.

Kenya is one of the most beautiful safari destinations in Africa blessed with plenty of wildlife safari attractions usually enjoyed by visitors on safaris in Kenya. Take time off your long holiday and visit Kenya at its most beautiful destinations for an exciting wildlife safari in Kenya. Kenya boasts numerous safari destinations, including a large number of wildlife parks, including Masai Mara National Park & Lake Nakuru National Park, considered to be the best.