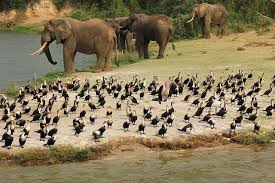 You could call it a mini St. Lawrence Seaway but this channel possesses a greater level of uniqueness; firstly because of its natural formation and secondly due to its great composition of fauna species. The Kazinga channel is found in western Uganda in a National Park called Queen Elizabeth (covering an area of 1,978 sq km) which many tourists on Uganda tours and Safaris often travel to.
The Kazinga channel is significantly wider than it looks on the map and covers a length of approximately 40 kilometers linking Uganda’s western Lakes of George and Edward. The smaller Lake George (250 sq km) drinks from streams and rivers that originate in the legendary Rwenzoris and through the Kazinga channel, it is able to share its fresh waters with the bigger Lake Edward (2000 sq km on the border of Uganda and Congo).
The channel’s waters and shores are a delight for Uganda’s Safari guests due to its many species of birds, mammals, reptiles and invertebrates. The channel is more famous for accommodating Queen Elizabeth’s biggest number of hippopotamuses which actually is one of the world’s hugest populations of these gigantic water-dwellers. Tourists can be certain enough to count as many heads of hippo as possible while at the channel.
The waters harbor one of Uganda’s largest populations of the vicious crocodiles; and its waters are a drinking point for the park’s warthogs, buffalos and antelopes. Elephants can also be observed having their baths from Kazinga’s waters. It is incredibly remarkable to see the world’s largest mammals playing in the waters like they have just been born again.
In addition to the mammalian and reptile species that tours and safari visitors in Uganda’s Queen Elizabeth National park can see while on a boat cruise in the Kazinga Channel, they can also see a variety of shorebirds. Queen Elizabeth is acclaimed as an Important Birding Area (IBA) because of its ability to house the biggest number of bird species (over 600 species); and sixty (60) of these can be observed in the Kazinga channel area. Some birds that tourists may see include the pelicans, water ducks with their cute naïve ducklings and the celebrity crown cranes (which Ugandans love to call the crested cranes). The boat cruises normally start from the Mweya peninsula at 3:00pm and 5:00pm with as many as forty (40) tourists.
The Kazinga channel has in the past received excellent reviews from guests on Uganda Safaris and Tours and this is expected to continue in the future due to the beauty that is focused in this small wetland ecosystem of Queen Elizabeth National Park; including the unforgettable but mind-boggling views that Queen’s guests will intentionally and unintentionally enjoy. The Kazinga Channel is one place you will want to check out while in Queen Elizabeth National Park