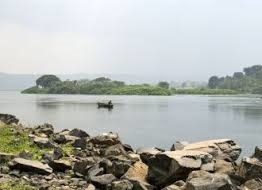 Located in the northern part of the Uganda safari destination of Queen Elizabeth National Park in the south west of Uganda, the Katwe explosion crater has presented itself as an impressive destination that a traveler can encounter.
The excessive volcanic pressures resulted into a series of volcanic eruptions that left a range deep hollows that were to be filled with water forming crater lakes. The Katwe area experienced this earth process and an explosion crater field was formed in an extinct form though some still emit sulphurous gases as encountered on safaris in Uganda.
Visiting the Katwe Explosion crater is by no means ordinary. The people have lived around it as an enclave community within the rolling savannah park of Queen Elizabeth. Including the Katwe area on the list of what to visit while planning safaris to Uganda; is one of the life time decisions that a world traveler would not regret for having undertook. The communities have got rich traditions and their lifestyle is centered on the lakes’ natural offerings. The lakes do not have inlets and outlets and thus have become rich mineral hub especially salt. Lake Katwe is famously known for this and you take time to study the local processes of salt extraction and how they arrange their mining areas.
The processing of these products and eventual distribution process is rewarding too. The Katwe Lake extends to 3,265 feet in depth and is extremely saline. The area was lucrative in the pre-colonial times as salt by then was a valuable mineral. Though its value later reduced, the resource extraction has persisted traditionally for a long period of time. Besides the salt encounter, the lakes are rich habitats to a range of bird species including the unique and beautiful flamingoes which are encountered in safari in Uganda.
Due to its location in the park, the crater field with its rugged landscapes that are a darling to the Baboons and elephants. The drive the crater drive track offers impressive scenic views and the extending to the wider savannah plains of Queen Elizabeth like the Kasenyi makes your visit to the area worth the time and price. The views of the overlooking Rwenzori Mountains dubbed the mountains of the moon also add spice to remarkable memories for your Uganda safari tour.
Uganda safaris/Uganda safari News
Prime Uganda safaris & Tours Ltd