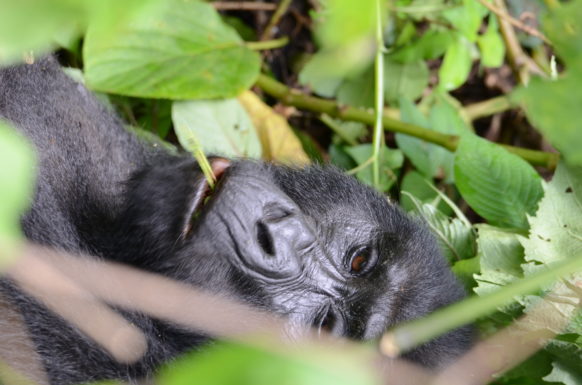 Gorilla safaris in Uganda are increasing due to mountain gorillas which are magnificent animals on planet earth and Uganda is blessed to have such wonderful creatures in its motherland. Seeing the gorillas in the wild is a once in a lifetime experience that one wouldn’t mind doing again.

Bwindi impenetrable national park is a home to many mountain gorillas; it encompasses many species of mountain gorillas that you cannot accomplish unless you head to Uganda. Travel to bwindi and see the famous and endangered mountain a gorilla, this experience is one of the most amazing and surreal of any one’s life.

Travel to Uganda and have a view of the gorilla sanctuary in Bwindi which is encompassed with the rain forest which is spectacular as it offers a dramatic, heavily forested and dense land scape crisscrossed by numerous animal trails, allowing access for tourists.

This Park is best known for the fascinating gorillas, where the time taken to find them and terrain varies according to the movements of these primates. The thrill of spending time and observing these giant gorillas is rare, moving and awesome and this experience will leave you with unforgettable memories of a truly unique experience. The gorillas are shy and peaceful animals and it is an unforgettable experience to watch and photograph them as they play and interact with each other.

Gorilla tours to Uganda will include visiting the hillsides which are mist- covered and sheltered by one of the ancient and very biologically varied rainforests in Uganda that dates back to more than 25000 years, comprising of about 400 varied plant species. More notably, this ‘’ impenetrable forest’’ in addition protects an predictable 320 population of mountain gorillas- approximately half of the population in the world, among which are a number of habituated groups , that can be tracked by visitors.

The word “Bwindi” means “darkness” and taking a hike this magnificent forest will certainly unveil to you the reason why the forest was named so. You will as well be in position to fast tell why actually the forest is also regarded as Impenetrable. One requires being realistically physically fit to take part in this mountain gorilla tracking / trekking adventure because it may involve climbing the steep terrain

Gorilla adventure in Uganda is wonderful in the way that it not only involve the endangered impressive mountain gorillas but also there are also 346 bird species and more than 200 butterfly species, about 324 species of trees, ten of which are only found in this areas in the whole of Uganda. This is really a destination to explore. Because there are few habituated Gorillas living here (gorillas that have been trained to withstand human presence and not likely to attack), actually the time offered to see them is limited and so are the permits which currently are offered at a cost of $500 per individual. No person ever complains after spending some time with these very fascinating Mountain Gorillas in Uganda within Bwindi Impenetrable Forest, which is among the most stunning rainforest anyone will ever come across.