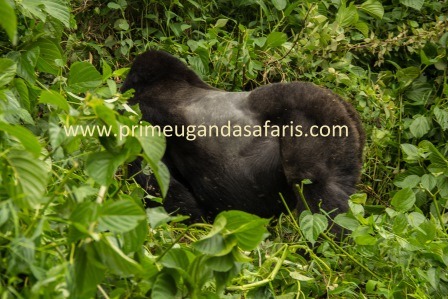 For most animal species in the world, it is not unusual to live in families, groups or communities and each one of these communities has a leader. Humans are the best species to demonstrate this mannerism. We have a leader for even the littlest of reason but there is always a supreme figure who in a nation is the head of state. In some Nation States he is called the president, while in others he is the King. But did you know that chimpanzees and gorillas also have a president? Or let’s break it down and call him a leader. This fact can be justified during a Uganda primate tracking safari in one of the parks like Bwindi Impenetrable, Mgahinga Gorilla or Kibale Forest National Park.
Mountain gorillas live in groups called families and each family has at least one (1) adult male gorilla called a silverback (because of the shiny color of the short hairs of his back). If a family only has one silverback then that particular silverback habitually becomes the leader of the family; called the “Alpha Silverback”. However, if there are more than one silverback then campaigns have to be held to choose an Alpha. Tourists who embark on Uganda gorilla safaris to Bwindi Impenetrable and Mgahinga Gorilla National Park get the opportunity of seeing an Alpha silverback.
In the chimpanzees, many which can be seen on chimpanzee tracking safari to the Ugandan National Park of Kibale National Park; it is a somewhat similar story. Chimpanzees live in communities relatively larger than those of their prized cousins, the mountain gorillas; and they range between twenty (20) and beyond 150 individuals.
At the apex of the chimpanzee leadership structure is an “Alpha Male” Chimpanzee who has a number of subordinate beta males who are answerable to him. A normal chimpanzee community will also have an adult family who heads all the female chimps in the community, but she is not necessarily the wife of the Alpha male.
You would think that in the gorilla and chimpanzee groups, the strongest would dominate; because this is obviously the rule of the jungle or the “Jungle Law”. But remember that these species share to a great depth a similar genetic composition with their more developed relatives the humans. They therefore choose their leaders in a totally different way than most of the other jungle animals. It is also not necessarily the oldest male in the family who takes on the leadership of the family or community. So what is the mystery behind choosing the king or president among these great apes of Africa?
Although strength and maturity might come in handy, an aspiring ape male ought to be more of a manipulator, in a manner similar to how politicians win the hearts of their subjects who later on vote them into power. The Alpha Male is normally the most cunning of all the primates in the family to a point that even the stronger males find no reason in not bowing down to him. The Alpha must also be hardworking especially in finding the perfect eating spots for his family to have breakfast, lunch and dinner lest he will lose popularity and his regime will come to an end.
Some of the weaker Alphas also have a tendency of shooting up their fur so that they look bigger, fiercer and most dominant in the group therefore scaring away any potential usurpers. There are some cases where leaders are born; sometimes after an alpha breathes his last one of his sons may take on after him but if the community finds him to be unpopular, he will also be toppled by one of the other more competent males in the community.
Like among the humans, although mountain gorilla or chimpanzee leadership comes with a lot of responsibility, it has a number of privileges clouded behind it. Some of the privileges include having the first bite of every delicious meal and also the fact that most of the girls and women in the family infatuate on the Alpha.
So in case you fall in love with one of the gorilla families or chimpanzee communities during your Tour and Safari in Uganda (which you most definitely will), you are free to stay and become their leader; provided you can meet the desired qualities of an Alpha Silver-back among the mountain gorilla or then Alpha Male among the chimpanzees.