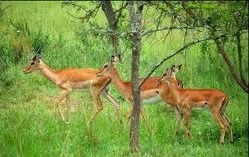 Lake Mburo National Park is a compact gem that is loved by many travelers on their Uganda safaris main to enjoy wildlife encounter, the park which is situated Mbarara District in western part of Uganda close to the highway that links Kampala main city to the various parks of western Uganda. It is one of the smallest savannah national parks found in the pearl of Africa Uganda and its located just 30 km by road east of Mbarara town.
Lake Mburo national park lies at an altitude of 1,220m to 1,828m above sea level and it’s located at an estimated distance of 240square kilometers from Uganda’s Capital city Kampala on the western direction of Uganda. Uganda’s smallest savannah park covers an area of 370square kilometers and its wetland habitats are comprised of 20% of the park’s surface.
The historical aspect of the park is that it was gazetted in the year 1933 as first a controlling Hunting Area and later in 1963 the hunting area was upgraded to Game Reserve and these boasted tour and safari in Uganda . Before the park was upgraded into national park in 1983, the local Banyankole, Bahima people who were the traditional inhabitant of the land where continued grazing their long horned cattle in the forest Reserve. The Uganda Government under the leadership of president Obote decided to upgrade the game reserve into national park and this was aimed at weakening the Banyankole who supported Obote’s Rivals and hence the park came at time of the Operation Bonanza killing of three hundred thousand people. The local pastoralists where pushed and evicted out of the park without any compensation and these remained against the formation of the park and kept on poaching and tress- passing on the park land.
In the year 1985 the regime of second Obote was toppled and local residents who were evicted from the park area of Lake Mburo came back and re-settled in the Park’s land and they also pushed away park staff as well as destroying infrastructure and wildlife habitats and this affected safaris to Uganda. Small portion of the park’s land area was finally re-gazetted by the ruling NRM government in the year 1986 and from that year to date the country has witnessed an increase in the number of travelers under taking safaris in Uganda.
The area around Lake Mburo national park lies in a rain shadow between the third largest in the world Lake Victoria and the wonderful Rwenzori Mountains. The park experiences an average rainfall of 800 mm throughout the year. Its strategic location near the equator make the park to experience bimodal rainfall pattern with its longest season of rain pour being February to June, and the shortest being September to December. The rains pour is unpredictable and very erratic but most of its rains tend to pour in the month of April and November.
Lake Mburo boast of a total of 13 other lakes located within the surrounding areas of the park and it constitutes part of the 50km-long wetland area that is connected by a swamp. In description five of these prominent lakes are straight away located within the park’s borders. At first Lake Mburo park was mainly covered with savannah vegetation but currently the park is mainly covered with woodland vegetation because the park does not have the Elephants which tend to tame the vegetation. The savannah vegetation which is dotted with ridges as well as forest gorges occupies the western part of Lake Mburo national park.
Uganda Safaris /Uganda Safari News
Prime Uganda Safaris and Tours Ltd