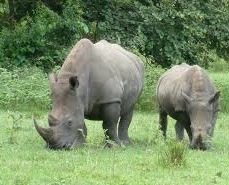 Ziwa Rhino Sanctuary located along the main road that links tourists on Uganda Safari destination to Murchison falls is the only place where you can view the white Rhinos which had lost grounds in the country due to poaching and serious human conflicts that affected the country in the early 197os. Spreading over 7000ha of land, Ziwa Rhino sanctuary is just 7 kilometers from Nakitoma.
The new natural home of White Rhinos in Uganda – Ziwa Rhino sanctuary was first started in 2005 in the savannah plain vegetation of Nakasongora district. The famous sanctuary was established to help reintroduce the endangered white Rhinos species to Uganda- the pearl of Africa. The Sanctuary is now safe place where tourists on Uganda safaris to Murchison falls can visit to have full account of the big five wildlife species. The vision of the sanctuary is to build a sustainable populations of Rhinos and later on transfer them to their original home in Uganda‘s national parks where the other big four animals are living.
Started with only six white Rhinos, Ziwa Rhino Sanctuary is the only strategic place where tourists on Uganda safari tour can trek the 13 different white Rhinos protected in the sanctuary. Your visit to the sanctuary will expose you to the first four white Rhinos that were transferred from Solio Ranch in the nearby Kenya. In addition to the four, you will have that unique opportunity to confront the two other white Rhinos that were donated to Uganda from Disney’s Animal Kingdom in Orlando and Florida all located in USA.
Ziwa Rhino Sanctuary- which is perfect en-route stopover for travelers on safari tour to Uganda’s Murchison falls National Park offers full view of the 15 individual white Rhinos housed in the 7000 ha of land covered by the sanctuary.
Your safari tour to Uganda’s Ziwa, allows you to confront white Rhinos identified by names of Hasan, as well as Taleo and Moja together with other females dubbed Nandi, Malaika and Babies like Uhuru, Obama, Bella among others.
The perfect location of Ziwa Rhino Sanctuary offers a golden opportunity for visitors on safari tours to Uganda to have full account of all the big five of the land wild game as the other four are full represented in Uganda’s largest national park – Murchison Falls National Park. In addition to the White Rhinos, the sanctuary is surrounded with Rugogo swamp where visitors on Uganda safaris and tours can enjoy the views of rare birds such as shoe bill.
Uganda safaris/Uganda safari News
Prime Uganda safaris & Tours Ltd