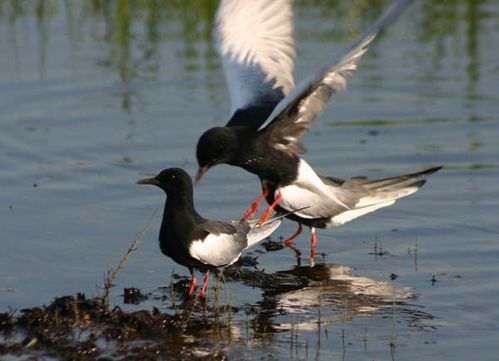 Scientifically referred to as Chlidonias leucopterus, the White-winged terns belong to the Sternidae family and are among the unique bird species explored on Uganda Safaris and tours.

The White-winged terns are generally small bird species thriving majorly close to fresh water bodies in various parts of the world including Asia, Europe, Australia and Africa where they are viewed on Africa birding safaris including birding safaris in Uganda.

The adult white-winged terns are marked with short red legs, short black bill about 22 – 25m from the feathers, black neck, dark grey back with white rump not forgetting a light gray tail. The wings of this bird species are majorly white as viewed by birders on safari in Uganda. The differences in body plumage may arise depending on the breeding seasons and climate conditions.

Regarding distribution and habitat, they thrive in fresh water marshes and tend to nest on floating vegetation or on the ground near the water. They lay 2 – 4 eggs in their nests which they build using small reed stems along with other vegetation. The white-winged terns feed on insects and small fish.

In the field of conservation, they are listed as species of Least Concern on the red list of the International Union for Conservation of Nature (IUCN).  In Uganda, the White-winged terns can be explored in Lutembe bay on the shores of Lake Victoria while on a Uganda birding safari.