Why visit Murchison falls national park on the safari in Uganda?

Home » Why visit Murchison falls national park on the safari in Uganda? 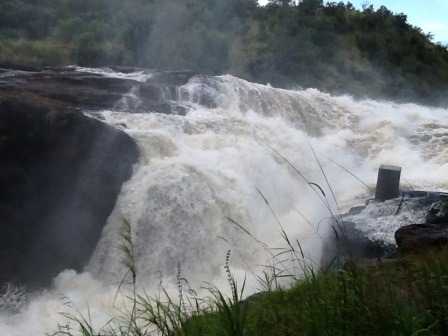 To the north west of Uganda, there lies a magical classic game park whose beauty and wonders are far beyond those of other ordinary Uganda safari destinations.
The Murchison Falls National Park accessed from different corners of Uganda including the country’s capital Kampala at 311km distance that lasts 5 hours of drive presents a typical wilderness encounter that matches that of Masaai Mara and the great Serengeti while beating them on other myriad of wonders that are typically absent in the listed destinations making it not only a must visit on safaris in Uganda but also at a regional level.
The Protected area stretches to 3,840km2 sheltering extensions of open savannah intercepted by patches of borassus palm, savannah thicket and savannah woodland, the extensions of riverine vegetation, dense forests not forgetting the sections of open water presenting an ideal habitat for diverse species.
The Park is bisected by the mighty Nile River which stands as the longest on the global scale and it is with in Murchison Falls National Park that the Victoria arm of the Nile empties into Lake Albert giving birth to the Albert Nile. The River amazingly leaves behind a magnificent waterfall that is notably the most significant natural feature to ever happen on the course of the Nile. Surprisingly, the Murchison Falls is recorded as the most powerful water fall in the world. It is a historical moment to encounter the Nile River squeezing itself to pass through a less than 7m ravine as it falls 43m below to the famous regarded Devils Cauldron generating a thunderous roar that is covered by a plume of spray and a trademark rainbow on your safari to Uganda.
Besides the falls, the river presents the magical River cruise ever in Uganda. The views of the globe’s second largest Reptile – the Nile crocodile, the Hippos along with prehistoric shoe-bill stork derive remarkable memories on safari in Uganda.
The extensive open savannah grassland and the savannah thicket in the northern section of the park presents magical wildlife views that can never disappoint. The four of the big five except the Rhinos which got extinct but now thrive in the adjacent Ziwa Sanctuary thrive in the park. The other sights of Rothschild Giraffe with Murchison Falls sheltering the greatest count of these species in the whole world, the stretched Jackson’s Hartebeest, the herds of Uganda Kobs, the views of the Oribi mark the exciting sights on your game drive in the park.
For birders, Murchison Falls National Park is a real Paradise. With 451 species of birds, Murchison Falls National Park is by no means an ordinary birding destination. The birders like it for its diversity of savannah birds and the swamp dwelling species including the Shoe-bill stork that is highly sought after on Uganda birding safaris.
The adjoining Kaniyo Pabidi Forest is magical. It presents the groups of habituated Chimpanzees making the only chimpanzee trekking site in the whole of the north. Travelers on Uganda safaris have found it ideal to combine an exciting moment with chimpanzees on their wildlife safari to Murchison Falls National Park.
All these combine to justify your visit to the Murchison Falls National Park while on safari in Uganda.