Why visit Mountains of the moon – Uganda Safaris & Tours

Home » Why visit Mountains of the moon – Uganda Safaris & Tours 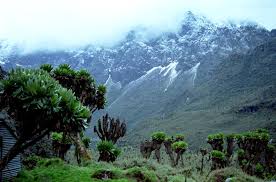 Safaris in Uganda are mainly attracted to the Rwenzori Mountains due to its littering snow on top of the mountain. This has greatly attracted many visitors to come for tour visits with in the country.

The Rwenzori Mountains, previously called the Rwenzori Ranges and sometimes the Mountains of the Moon, is a mountain range of central Africa, often referred to as Mt. Rwenzori, located on the border between Uganda and the Democratic Republic of the Congo, with heights of up to 5,109 m The highest Rwenzori are permanently snow-capped, and they, along with Kilimanjaro and Mount Kenya are the only such in Equatorial Africa.

Safaris have been be conducted at Rwenzori commonly known for their vegetation, ranging from tropical rain forest through alpine meadows to snow; and for their animal population, including forest elephants, several primate species and many endemic birds. The range supports its own species and varieties of giant groundsel and giant lobelia and even has a six meter high heather covered in moss that lives on one of its peaks. Most of the range is now a World Heritage Site and is covered jointly by The Rwenzori Mountains National Park in Uganda and the Parc National des Virunga in Congo.

Although the flora in the Rwenzori is closely related to that of other East-African high mountains it is much more luxuriant here. This is mainly a result of the high and regular rainfall in the area. The distribution of vegetation is for a good deal determined by the altitude. At higher elevations, certain genera of plants grow unusually large. These have greatly attracted those tourists who usually carry out research.

Trekking the mystic Rwenzori Mountains National Park in Uganda is a truly fantastic and unique experience, the wonder of the high glaciers, the beauty of the valley of nine lakes, the bearded lichen hanging from giant heathers with a backdrop of rocky cliffs, crags and snow capped peaks. The wide variety of flora and fauna with several biospheres as you ascend through different vegetation zones creates the ultimate experience for trekking. Never before has this unique and beautiful trek been available, totally untouched and undoubtedly one of the most beautiful treks in the world.

The Rwenzori Mountains is a World Heritage Site and offers the opportunity to see nature at its best. The plant life varies from heavy tropical rain-forest, bamboo forests, and montane cloud forests to alpine vegetation and the scenery is truly spectacular. Above 4,500 meters the snow and glaciers add that special dimension to the wondrous views throughout this pristine mountain range. Mountain Rwenzori has greatly attracted many safaris tours usually those focused on adventure.