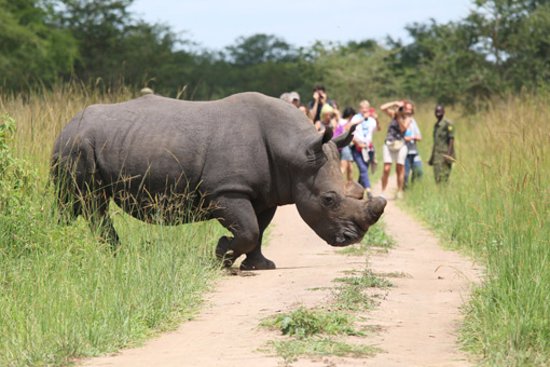 which sits on a 70 km² piece of land and is home to 33 endangered Southern white rhinos was closed to the public by UWA on 20th April 2021 with a message that no tourism activities would be undertaken until further notice.

The re-opening of Ziwa Rhino Sanctuary brought relief to travelers planning their Uganda tour since it is one of the most exciting places to visit in Uganda and the only place in the country where you can see wild rhinos. The sanctuary offers visitors on Uganda wildlife safaris an exhilarating rhino tracking adventure in search of these legendary members of the Big Five on foot.

WHERE IS ZIWA RHINO SANCTUARY FOUND IN UGANDA?

Ziwa Sanctuary is found in Nakasongola district in the central region of Uganda, about 176km from Kampala. It takes about 3 hours to drive there and this is about half of the journey to Murchison Falls National Park – the largest national park in Uganda – which is home to the world’s longest river (the Nile), the world’s most powerful waterfall, and over 76 mammal species including 4 of the Big 5 – lions, leopards, Elephants, and Buffalos.

Therefore many visitors on safaris in Uganda visit the sanctuary as part of their Uganda tour packages to Murchison and other safari destinations like Kidepo Valley National Park, Kibale National Park, and Bwindi Impenetrable Forest National Park which is a popular site for Uganda gorilla safaris hosting nearly half of the world’s population of mountain gorillas.

WHEN WAS ZIWA RHINO SANCTUARY ESTABLISHED?

Ziwa Rhino Sanctuary was started in 2005 as a collaborative effort between Uganda Wildlife Authority (UWA), Rhino Fund Uganda (RFU), and Ziwa Rhino and Wildlife Ranch (ZRWR). The sanctuary was established to revive the population of rhinos in Uganda that were totally depleted in the country’s national parks and reserves where they previously lived due to intense poaching that happened during the 1970s and 1980s.

Ziwa Rhino Sanctuary started with 6 rhinos that were re-introduced to breed them with plans of taking them to Uganda safari parks when the number increased. Four of the rhinos including two males and two females were captured in Solio Ranch in Kenya. The two other rhinoceros were donated to RFU by Orlando Zoo at the Disney Animal Kingdom in Florida, United States of America (USA).

In June 2009, the first calf was born of a Kenyan father and American mother and was named Obama in respect to the former president of the USA. Thirteen rhinos have been born since 2009.

WHY WAS ZIWA RHINO SANCTUARY CLOSED ON 20TH APRIL 2021?

Ziwa Rhino Sanctuary was closed to the public by the Uganda Wildlife Authority because of the unending conflicts between the owners of the land on which the sanctuary is situated and Rhino Fund Uganda, a non-government organization that was managing the rhinos at Ziwa.

This happened a few days after 28 men purporting to be tourists on Uganda safaris invaded the sanctuary and damaged office property in what was thought to be an effort to evict the staff of RFU. The suspects revealed that they were hired from Kampala to execute the mission.

In the press statement issued at the time, Uganda Wildlife Authority said they realized that the conflicts could possibly compromise the safety of the Rhinos and they took the decision to avert the threat as a temporary measure till the parties involved settled the matter.

The statement further noted that UWA has taken over the security of sanctuary, which is within its mandate to protect wildlife resources in Uganda as per the Uganda Wildlife Act, 2019. “We have closed Ziwa Rhino Sanctuary to the public and as such, no tourism activities will be undertaken until further notice”, UWA said.

WHAT WAS THE SOURCE OF THE CONFLICTS OVER ZIWA RHINO SANCTUARY?

It should be recalled that in 2002, Capt Roy the owner of Ziwa Rhino and Wildlife Ranches (ZRWR) offered his land to act as a sanctuary to the rhinos for a period of 30 years. ZRWR then signed a memorandum of understanding (MoU) and license agreement with Rhino Fund Uganda (RFU). However, in October 2017, Roy terminated his MoU with RFU and ordered the organization to vacate his land and relocated the rhinos to another place.

This was as a result of the alleged failure to honor the agreement in a concession entered between the two parties on how to share the proceeds from the Uganda Rhino Sanctuary and the D and D International Lodges and Restaurant at the sanctuary.

In 2020, after a series of meetings with President Yoweri Museveni and the Ministry of Tourism, the two parties signed a fresh 5-year memorandum of understanding for the continuation of the flagship project. However, in March 2021, Roy laid down fresh demands. On April 15, 2021, he stormed out of a meeting called by the Ministry of Tourism and UWA, saying he is no longer interested in talks but wants his land back.

Augustine Mudukoyi, the general manager of Rhino Fund Uganda said that they tried to settle the misunderstanding by agreeing to all the demands by Captain Roy – offering to give him 20 percent collections and appoint three of his members on its board. Mudukoyi instead accuses Roy of making fresh unrealistic demands, which include 100 percent collection and relocation of the executive director, Angie Genade from the sanctuary to their Kampala headquarters.

HOW WERE THE CONFLICTS OVER ZIWA RHINO SANCTUARY SOLVED?

After lengthy talks and final word reached, the two parties agreed to jointly work together in managing the Rhino breeding program as this will be done by ZRWR while Government through the UWA will take the lead in monitoring the Rhinos and provide for their safety.

“Uganda Wildlife Authority is open to talks with the RFU because they did a commendable job and have expert advice in animal management. The limit is on a possible return to Ziwa because the dispute was not with UWA but the owners of the land in Nakasongola,” Mwandha clarified. UWA has already deployed more than 20 of the former workers at the sanctuary.

WHAT ACTIVITIES CAN YOU DO IN ZIWA RHINO SANCTUARY ON YOUR UGANDA SAFARI?

Ziwa sanctuary offers several exciting activities to visitors on wildlife tours in Uganda and these include.

Ziwa Sanctuary offers an opportunity to track the Southern white rhinos on foot which is one of the top activities to do on your Uganda tours. This activity is led by an expert local ranger guide who takes you through the bush to where the rhinos are on the day of your visit.

During Ziwa rhino tracking, you also have a chance to encounter a range of other wildlife species including Uganda kobs, oribis, bushbucks, waterbucks among others, and several other bird species.

Your guide is there to keep you safe from harm so listening to the safety briefing he gives you is very important. Recommended times for this adventure are 8.00 am to 10.00 am or 4.00 pm to 6.00 pm but are available all day. Tracking takes 1½ to 2½ hours depending on the location of the rhinos. You need closed shoes, long pants, water, and insect repellent during trekking.

Another amazing activity to enjoy in Ziwa Sanctuary during your Uganda safari tour here is the shoebill trek and canoe ride. The shoebill stork is one of the most sought-after birds to be seen in Uganda. This is one of the only places where you can see the shoebill stork. The best sighting has been 11 in one trip. Within swamps, these prehistoric-looking birds are nesting.

Early morning 6.00 am shoebill trek and canoe ride through the swamp not only allows you to find the shoebill but also to see the beautiful Ugandan sunrise over Lugogo Swamp. Waterbirds are plentiful and this activity is a must for anyone who loves nature or is interested in birding.

As this activity is so early in the morning, you must stay the night as you are unable to enter the sanctuary before 7.30 am. It takes approximately 4 hours.

Ziwa sanctuary has guided nature walks through the grand savanna, allowing you to enjoy the diversity of nature compressed on the Sanctuary’s 70 square kilometers acreage. You will walk with a ranger guide and receive instructions on how to behave and various information on the botany, animals, and birds learning about the general ecosystem of the sanctuary. Some of the animal sightings on this nature walk include Waterbucks, Bushbucks, Kobs, Leopard, duikers, etc. The activity is can be done between 7.30 am and 4.30 pm. It takes approximately 2 hours

The guided night walk introduces to your night sounds and sensations you did not know existed! This is an experience you cannot exclude from your activities in the sanctuary.

There are many nocturnal animals and who knows what you might bump into. The recommended times for this activity are 8.30 pm to 11.00 pm and it takes about 2½ hours. You need to be in closed shoes, long pants, insect repellent, and a flashlight.

WHAT TO PACK FOR YOUR ZIWA RHINO SANCTUARY SAFARI?

Regardless of all the recent conflicts, Ziwa Rhino Sanctuary is now open to the visitor on Uganda safari holidays. You can now visit the sanctuary and track the endangered wild white rhinos on foot which is a once-in-a-lifetime opportunity.