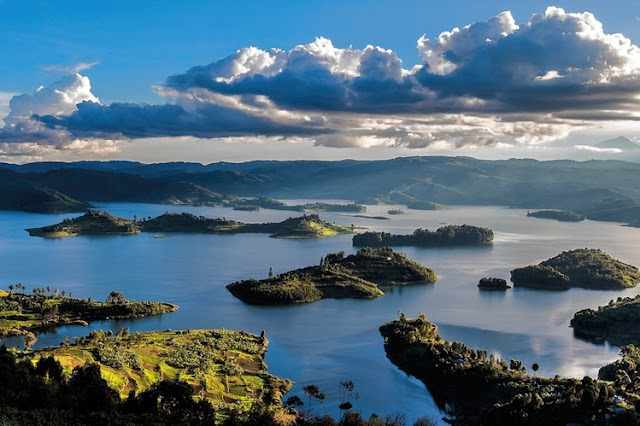 If you are looking for a beautiful relaxed place where you can spend time on your safari Uganda, then Lake Bunyonyi offers just that. Lake Bunyonyi Uganda; literally translated as “Place of many little birds” is a freshwater body located in South-western Uganda close to the Uganda Rwanda border. Lake Bunyonyi is the 2nd deepest lake in Africa after Tanganyika and one of the few lakes in the world said to be Bilharzia free. This magical lake is surrounded by beautiful terraced hills terraced by the local Bakiga tribe living in this area offering beautiful scenery.

The lake is home to over 29 magical Islands some of which are uninhabited and others are inhabited by locals and tourist facilities. Its Islands have a rich history Akampene (punishment) Island, Bushara Island, Bwama and Njuyeera (sharp’s Island), and Bucuranuka (upside down Island), which are the main islands.

Bucuranuka Island was used by the brewers. So one day a group of twenty men were brewing sorghum beer on the island when an old lady passed by them and asked for a sip. They usually gave her but on this day, they rudely refused her, and told her to “Get lost!”. She then requested for someone to take her back to the mainland to which some Youngman agreed as they wanted to get rid of her. She cursed them together with the island. When the young man delivered her to the mainland and was starting to return, the island turned upside down drowning all the brewers. The only survivors were this Youngman who took drove the old woman and the chicken that flew away from the island! This is why the island is now called Bucuranuka, “Upside Down”.

Once upon a time among the Bakiga culture, it was unacceptable for a girl to get pregnant before officially getting married. Once this happened, the unmarried pregnant girls were riding in a canoe to this small island that comprises of just tree so they die of hunger or die while trying to swim to the mainland (swimming skills were rare).

This was done to educate the rest, to show them not to do the same. However, this was an opportunity for a man without cows to pay the bridewealth. They could go to the island and pick up a girl to marry. The practise got abandoned in the first half of the 20th century. Although this practice has been abandoned, it is still possible to find women who were picked up from punishment island today.

This island is the home of Lake Bunyonyi Development Company, an organization with strong links to Church of Uganda, the main church of the lake area. They use tourism to generate funds for several development projects around Bunyonyi. The island has many luxury tents, chalets, and also campsites for tourists to stay on. It is also possible to rent out canoes and sailboats with a view to paddling to one of the other islands.

The striking feature of the island is its forest, a demonstration of the most appealing attribute of the eucalyptus tree: an exceptionally fast growth rate. The hills around Bunyonyi used to feature many forests but overpopulation led to them being cut down to create land for agriculture needs. Eucalypti have been imported to improve the situation. But eucalyptus plants may also have a negative effect: they can soak everything useful in the soil, leaving it more or less barren.

In 1921, an English missionary called Dr Leonard Sharp came to this part of Uganda and in 1931 established a leprosy treatment centre on the then uninhabited Bwama island. A church, patient quarters (model villages) and a medical facility were built, while Sharp settled on Njuyeera Island (probably meaning ‘white cottage’, after the similarity of the doctor’s small white house to Sharp’s father’s house in Shanklin, now The White House Hotel). The rationale of the leprosy colony was that of ‘voluntary segregation’, where the provision of a happy community to live in would attract leprosy sufferers, so removing them from the communities where they might infect others.

The buildings of the hospital are now used by a boarding secondary school which attracts students from the entire region. There is also a primary school but no village on the island.

Kyahugye Island is approximately 30ha in size and also the nearest to the mainland. It’s just a mere 5-minute boat ride away. It is surrounded by a 1-2m wide strip of reeds interspersed with papyrus. The Island has many tree species that form a wide perimeter around it. The vegetation on the island falls into four categories namely bush, open fallows, tree plantations and natural vegetation. The hilltop part of the island is flat and has been developed for tourists. There are lodges and campsites for accommodation, and a well-stocked bar and restaurant. The top of the Island offers spectacular views of the surrounding terraced hillsides, the calm waters of Lake Bunyonyi, and the neighbouring Islands. On a clear day, Mt. Muhabura can be seen in the distance.

With its scenic vicinities, cool weather and numerous little islands, the place is good for Lake Bunyonyi safaris and has been well marked as a great spot to relax and chill out, and offers visitors a number of activities to enjoy including;

Relax and chill out around the lake shores

Get on a boat ride to the islands

Boat trips on Lake Bunyonyi are another exciting safari adventure. You can choose to paddle or be paddled along the lake in a dugout canoe. Sailing along the lake in the locally made canoes arouses the sweet feeling of being on typical African Safari. The option of cruising in modern speedboats is also available and ideal for sunrise and sunset cruises. It is beautiful to watch the African sun rising or setting over the horizon.

Zipline Adventure across the Lake

Looking for a jaw-dropping, heart-racing experience? Try zip line that affords those brave enough! A stunning lake view which will create memories that last a lifetime.

Explore the villages and surrounding landscapes

While chilling at the Lake, take a hike on one of the surrounding hills, and you will be rewarded by spectacular views of landscapes. You can also visit a local school and interact with school children this is a perfect opportunity to learn more about the people.

Nature Walks are an exciting adventure to embark on during a Uganda Safari trip to Lake Bunyonyi. Nature Walks through the islands are not only refreshing but are also a chance to encounter Uganda’s celebrated beauty. The nearby Kigezi highlands and terraces are probably hiking destinations.

A 20-minute boat trip will land you at Sam Mulisa’s hut, a traditional healer. Spend some two hours with him and learn about traditional medicine practices and more about how he has turned his home into a traditional clinic.

Bunyonyi means ‘a place of little birds’. Just like its name suggests, the lake is home to over 200 bird species. For bird lovers, this is a great place for a Uganda birding safari. You’ll have some great sightings of birds such as grey-crowned cranes, red-chested sunbirds and many flycatchers.

Despite its depth, good swimmers have a chance to take a swim in this beautiful lake. There are no crocodiles or hippos loitering in the lake waters and it is bilharzia-free. Being one of the deepest lakes in Africa, Lake Bunyonyi is ideal for divers and adrenaline lovers.

Around Lake, Bunyonyi is a number of native dwellers including the indigenous pygmy Batwa who lived in the nearby Ichuya forest, the Bakiga, and the Abaheesi who are traditional blacksmiths. A visit to the local communities is an opportunity to be entertained with traditional performances; music, dance, drama and folklore from local performing groups.

There are some great photographic opportunities at sunset when the rays reflect in the calm evening waters of the lake. A great way to end yet another amazing activity-filled day on Lake Bunyonyi!