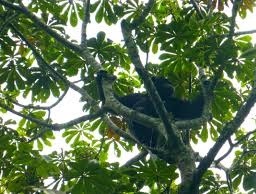 Formerly known as the Maramagambo forest eastern extension, the Uganda safari destination of Kalinzu Forest Reserve stretching to 137km2 is traversed by a range of impressive scenic trails that curve along the ridges and the valleys of the western arm of the East African Rift Valley and its escarpments presenting magical Mount Rwenzori views, the Kazinga Channel and Lake Edward.
As its name would suggest, the Kalinzu Forest Reserve is a typical tropical forest featuring a range of 414 tree species and the shrubs among which include the Prunus Africana, Ficus, the Parinari and Stroboia and among others which makes it an ecological vibrant destination worth encountering on Uganda safaris.
Besides trees, the Kalinzu Forest Reserve supports a range of forest birds over 378 Species among which include the impressive Great Blue Turaco, the Cuckoos and the Black and White Casket along with Sun birds. Additionally, the forest Reserve shelters six (6) species of Primates including the famous Chimpanzees which pull counts of world travelers to plan chimpanzee safaris to Uganda, the black and white colobus monkey, the Olive baboon, the L’Hoest Monkey, red tailed monkey and the Blue Monkey along with the elusive Pygmy antelope. The forest goes ahead to feature Nocturnal Species including two types of Galago and Potto which can be explored on the night hikes / walks on safari in Uganda also where tree hyrax eerie shrieking can be encountered.
Kalinzu Forest Reserve is a rich habitat indeed. The forest features 97 moths Species, the 262 Butterfly Species along with impressive flowers and the Reptiles whose movements are amazing to explore while on Uganda tour. The Primate Census was carried out in the forest Reserve of Kalinzu in the year 2001 and the total number of chimpanzees were put at 240 but it can be noted that the two (2) groups of around 70 individuals are the ones that can ably be explored by the Uganda Chimpanzee safari undertakers and the educationists.
The forest Reserve of Kalinzu is close to the National Park of Queen Elizabeth and as a result the wildlife in Queen Elizabeth National Park at times seek refuge in the reserve most especially the forest antelopes like duikers, the leopards along with the wild pigs.
There are a range of travelers’ activities that can be conducted in Kalinzu Forest Reserve which makes it not only a site of ecological and conservational significance but also of economic value to  Uganda. These include the Chimpanzee trekking which is carried out in the morning and in the afternoon taking between 2 – 5 hours with one full hour moment with the gorillas. The Chimpanzee trekking experience costs $40 for each person who wants to participate which is comparatively lower than the other destinations which conduct the same activity. Kalinzu Forest Reserve also offers bird watching experience where short guided bird walks and whole day experiences can be arranged. The forest management gives the travelers an opportunity to explore the forest on foot on what they have termed as forest hiking / walking which presents an ideal opportunity to explore lush flora and scenic crater field. There is also magical Butterfly identification along with small mammal exploration.
Kalinzu Forest Reserve is 375km from the city of Kampala in the district of Bushenyi to the south west of Uganda. This drive can take you six (6) hours of driving and because of the winding roads in the area and the terrain, the 4 wheel drive would be the Ideal. If one picks interest in spending an overnight, the reserve offers camping grounds where the travelers can pitch their own tents or else they can utilize modest units in the adjacent townships of Ishaka and Bushenyi.