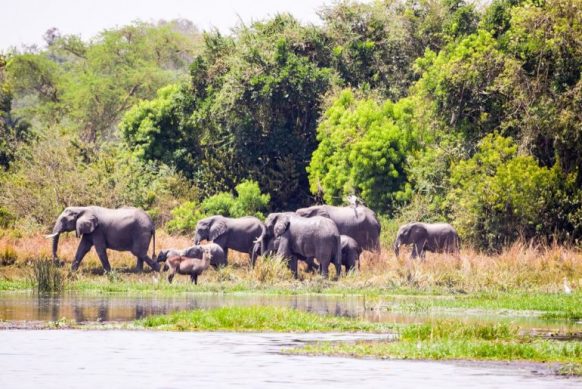 Karuma Wildlife Reserve extends over an area of 820 square kilometres. The reserve was established as a wildlife reserve in 1964 to act as a buffer zone between the Murchison Falls National Park and the surrounding Villages. The reserve is situated in Kiryandongo district in western Uganda. It stands at an elevation of 902 meters above sea level. The wildlife contains the spectacular roaring Karuma waterfalls located on the Victoria Nile. These fascinating waterfalls are situated not far from Murchison Falls National Park Uganda the largest and the oldest protected area in Uganda. Karuma Wildlife Reserve was traditionally an extensive area for large animals such as the elephants, buffaloes, and hippos in addition to the smaller wildlife species.

The most interesting feature to travellers of a Uganda trip in the reserve is the Karuma waterfalls situated along the eastern edge of Murchison Falls National Park. This Wildlife Reserve is located within the Murchison Conservation Area that consists of the Murchison Falls National park, the Budongo Forest Reserve, the Kaniyo-Pabidi Forest, and the Bugungu Wildlife Reserve. There is a local legend that the Rocks that form these Waterfalls were contrived by a powerful traditional spirit called “Karuma”, and it is from it that the waterfalls acquired their name.

Some of the notable animal species to see in Uganda’s Karuma Wildlife Reserve includes the Cape Buffaloes, the Elephants, the Uganda Kobs, the Rothschild’s giraffes, the vervet monkeys, the Olive baboons, the Black and white Colobus monkeys, L’hoest’s monkeys, the Topis, the Hippos, the Oribis and occasionally Lions and Leopards.

Karuma Wildlife reserve boasts with various bird species.  It is one of the best places for seeing aquatic birds such as Kingfishers, swamp flycatcher, yellow-throated leaf love, grey crowned cranes and sunbirds. 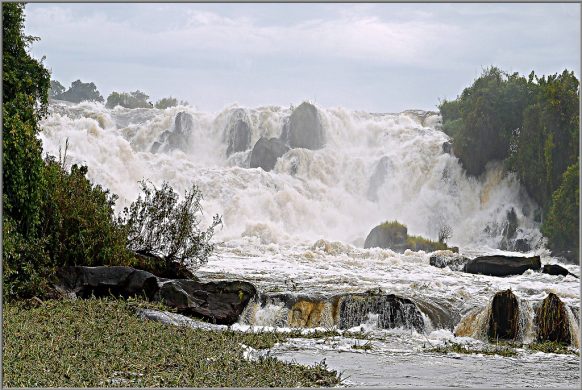 Besides the wildlife and bird species, Karuma Wildlife Reserve is widely known for the roaring Karuma falls on the Victoria Nile. The beautiful Karuma Falls comprises of a number of naturally cascading interlocking rock- formations that appear like a series of steps all the way to the bottom of the calm Victoria Nile. The art and order in which these rocks are arranged are very impressive and you will be fascinated at first sight. The falls are perfect for sightseeing

When the calm waters of the Nile reach this point, they flow downwards splashing and hitting the cascading rocks with a roar. They swelling volumes of water result in a white form as they eventually reach the bottom of the falls. The entire area is encompassed in refreshing water- a spray that comes from the splashing water. It’s a breathtaking sight.

Bird species in Karuma wildlife reserve include the shoebill stork the most sought bird by passionate birders on Uganda Birding safaris in Uganda. Other unique species to see in Karuma wildlife reserve include the Abyssinian ground hornbill, the swamp flycatcher and the giant heron. The existence of these unique bird species makes Uganda birding tours in the reserve a memorable experience.

During your Uganda safari to this hidden tourist site, you will not fail to see a variety of wild animals within the surrounding areas. Among the commonly seen animals include the Uganda Kobs, different monkeys, giraffes, elephants, baboons, buffaloes and lions plus leopards occasionally.

Where to Stay Within Karuma Wildlife Reserve Uganda

The camp is located near to the southern riverbank of the river Nile. The camp has bandas and camp tents which are free to all visitors who enjoy outdoor camping. The camping site is safe from danger. Red Chilli Rest Camp has cottages with single beds, the doubles, and family cottages. The bandas have ensuite bathrooms, toilets, and a cooking area.

Red chilli Rest Camp also has a spacious bar and restaurant which prepares both international and local cuisines to satisfy your cravings. Red chilli also has a fully stocked bar, with your favorite selection of, both, alcoholic and non-alcoholic beverages such as coffees and teas to take you through the evening. The restaurant at red chilli is open from 06:30 am, to serve breakfast to the in-house, and closes at around 9:30 pm after serving dinner. Despite, the bar at red chilli is open till midnight to give you enough time to enjoy your evening with friends It has a campfire in the campsite to give you a supplement of warmth you need to take you thought the evening as you enjoy your meals and drinks with your inmates

Karuma Wildlife Reserve is found on the Masindi-Gulu highway that crosses the Nile River, at about 110 kilometers/68 miles drive North-west wards from Masindi Town and only 70 kilometers/43 miles drive south from Gulu Town. Public buses to Gulu can be boarded from Nakivubo Bus terminal, and cost between Shs 20,000 and Shs 25,000.