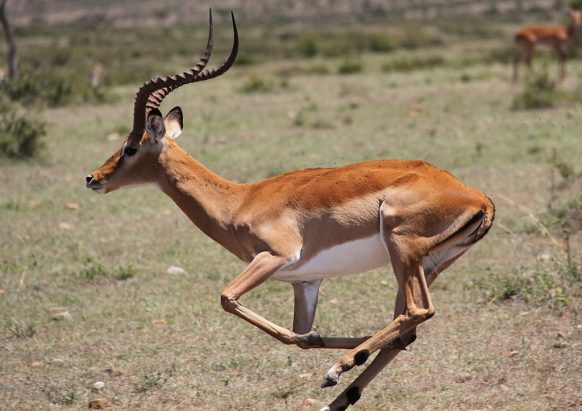 The Katonga wildlife reserve is located in western Uganda, along the banks of River Katonga. It is a savannah grassland ecosystem located within Kyenjojo and Kamwenge Districts.  The wildlife reserve lies with an area of 207 square kilometers. Katonga Game Reserve was gazetted in 1964 as a game reserve to serve as a corridor for migrating wildlife from western Uganda to Tanzania and South Sudan. It became a Wildlife Reserve in 1996 when the former Game Department and Uganda National Parks merged to form Uganda Wildlife Authority (UWA).  A Uganda wildlife safari into the Reserve is a three-hour drive from Kampala to Kyegegwa Town Council. At Kyegegwa, detour southwards for 42 km following well visible signposts. Katonga game Reserve is home to over forty (40) species of mammals and over one hundred and fifty (150) species of birds. Many of them are specific to wetland habitats. The best way to tour this reserve is on foot or by the use of canoes reason being there are no roads that allow safari vehicles to access the reserve.

The Reserve’s terrain is predominantly undulating in nature with distinct vegetation types. Vegetation includes grasslands, wooded grasslands, woodlands, riverine woodlands, swamp, riverine grasslands, papyrus. Most of the area is mixed savannah with acacia or woodland. However, large portions of the reserve are either permanent or seasonal wetlands.

The game reserve also contains various pockets of riverine and tropical forests. Its unique geographical location between forests, swamps and savannah vegetation gives the reserve a diverse ecosystem that favors the existence of a variety of animal species. The most dominant plant species include Sporobolus Festivus and Chloris gayana.

These species exist with associated species like Setaria species, Hyparrhenia species, and occasional Panicum maximum. The Katonga wetland system is interlinked with the Nile system forming an important wetland system for human survival. The variety of different vegetation types, particularly the wetlands, provides a range of habitats, which enhances the faunal diversity of the reserve.

Katonga Wildlife Reserve has a viable Sitatunga population inhabiting the Katonga Wetland System. The reserve also harbors a high population of waterbucks. The population of Hippos and birds is also growing. Other animal species in the reserve include the River Otter, Uganda Kob, Waterbuck, Leopard, Buffalo, reedbuck, bushbuck and duiker, and chevrotain. The reserve is also home to various reptiles, amphibians, and butterflies. Primate species in Katonga wildlife reserve includes Black and White Colobus Monkey, Olive Baboon and Vervet Monkeys.

The current bird checklist is over 150 including species-specific to wetlands, savannah, and forests. these Kingfishers and storks

Game viewing in Katonga wildlife reserve gives a unique opportunity to visitors on Uganda tour to spot out several mammal species. It is home to over 40 species of mammal and the commonly seen species include elephants, waterbucks, warthogs, Uganda Kobs, olive baboons and among others.

Katonga Game Reserve has three trails developed Uganda guided walks safaris in the reserve to allow visitors the opportunity to see birds and animal species. The early-morning walk along the Sitatunga trail offers the best opportunity to spot the timid antelope. Other mammals are frequently seen as you walk through the Savannah and later alongside the Katonga River.

The Kyeibale trail is a circular trek through the scrubland into the forests, passing interesting rock formations and caves used for shelter by the animals. The Kisharara trail traverses the Savannah to the wetland canal follows the Katonga river and continues up to one of the tributaries through a variety of eco-systems, offering the visitor an opportunity to see the Sitatunga antelope and various primates as well as other mammals and birdlife. Uniquely, it is possible to explore Katonga Wildlife Reserve by canal.

The Wetland Canal Trail is a 2km ride through the reed and papyrus swamp, guided by a local boat operator and accompanied by a ranger, allowing the best opportunity to spot wetland mammals such as the otter, and an abundance of birds including Kingfishers and storks. It is also possible to organize an overnight Uganda trip into the undeveloped interior of the reserve, but not during the rainy season.

Canoe trips offer the traveler on a Uganda wildlife tour an opportunity to see various species of mammals and birds such as water and papyrus associated birds, the river otters, and the Sitatunga antelopes. It also provides a good chance for Uganda birding tours where species such as Kingfishers and storks like shoebill stork can be spotted. The canoe trail is a two kilometers ride through the reed and papyrus swamp guided by a local boat operator. A safari to Katonga wildlife reserve gives you the opportunity to cruise a canoe as you trail through a shallow channel and its swampy areas.

Katonga Wildlife Game Reserve can also be visited during a Uganda cultural safari in the western region. The Banyankole people are the most popular people surrounding the wildlife reserve, they are cattle keepers of Ankole cattle are commonly known as long-horned cattle and they also arrange cultural dances for visitors as part of entertainment

In the reserve, you can only camp. And other basic accommodation is available at Katonga View Hotel and lodges which can be accessed at Kabagore just about 2km from the reserve Headquarters

The 207sq.km Katonga Wildlife Reserve is a savannah grassland ecosystem located within Kyenjojo and Kamwenge Districts.  A Uganda tour into the Reserve is a three-hour drive from Kampala, Uganda’s capital. The most direct route is the use of Kampala- Mubende road. From Mubende proceed to Kyegegwa about 41km a one-hour drive. This road will be impassable during heavy rain. At Kyegegwa, detour southwards for 42 km following well visible signposts.