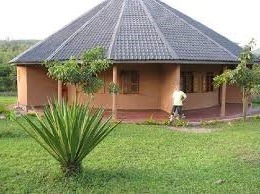 Uganda being a vast country with her tourist attractions spread all over the country, it sometimes poses long transfer distances for Uganda safari undertakers to connect from one destination to another. A case in point is Murchison Falls National Park which is in the North West and Kibale National Park in the west with 441km in between taking approximately nine (9) hours’ drive to connect between the two.
This kind of setting requires travellers on safaris in Uganda to have stop overs en route in order to avoid exhaustion on their leisure holidays. That’s why Kontiki Hotel in Hoima has positioned its self to serve this purpose for the comfort of travellers on Uganda safaris and tours.
Situated at 2km distance from the Hoima town center, Kontiki Hotel is a calm and cozy accommodation establishment that has got a partial setting similar to other Uganda safari lodges in protected areas which enables the guests to maintain the touch of wilderness.
Offering its accommodation in eighteen (18) cottages that are well furnished with 25 rooms in total which are all self-contained, Kontik Hotel has the capacity to accommodate big travel groups on Uganda safari tours. These cottages include; one family cottage, four double cottages and one twin cottage. Interestingly to note is that every room has a Television with piped music that will give you a glimpse of the urban environment since Kontik is within the urban environs of Hoima town. The Hotel also has camping grounds for clients interested in camping.
Kontik Hotel also has a modern Gabbie’s restaurant serving local and international dishes and Amooti’s bar that is well stocked with beers, spirits and wines. The conference facility is also available. This combine to make Kontik Hotel worth a stopover accommodation center as one transfers between Kibale and Murchison Falls National Parks and among other related destinations that attract travellers to plan safari tours to Uganda.
Uganda safaris/Uganda safari News
Prime Uganda safaris & Tours Ltd