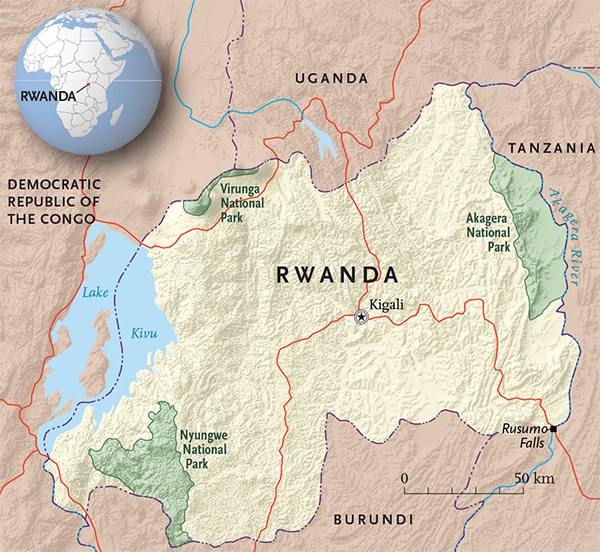 Each Rwanda national park protects a distinct ecosystem and a variety of species. Bordering Democratic Republic of Congo and Uganda, into which the Virungas volcanic mountain chain extends, Volcanoes National Park is the most heavily patrolled park in the world and the oldest in Africa. In combination with adjoining parks in the neighbouring countries, it serves as the world’s only habitat of the mountain gorillas, whose numbers have been increasing here over the past decade. Visitor numbers to the gorillas are strictly limited and passes must be purchased, often well in advance, from RDB. Golden monkeys also inhabit a separate portion of the park.[2]

To the southeast along the Burundian border, Nyungwe National Park hosts a large number of chimpanzees and a variety of other primate species in a highland rainforest environment.[3]

The eastern border of Rwanda, along with Lake Victoria and Tanzania, is the location of Akagera National Park and protects a variety of African fauna in a savannah ecosystem, including giraffes, elephant, buffalo, baboons, gazelles and zebra.[4] Lions originally inhabited the park but were exterminated by poisoning during and after the Rwandan genocide. The park is currently being fenced in to allow the reintroduction of lions to be imported from South Africa in 2014.

Located to the south-west of Rwanda, the Nyungwe Forest National Park is close to the border of Burundi and Democratic Republic of Congo in the south and the west respectively it’s a fascinating Rwanda Safaris destination. It is recorded to be among the ancient African forests that are noted to have survived the last ice age. Nyungwe Forest is among the largest montane forest in the East of Africa and considered to be the well-conserved forest in the entire highlands of Central Africa. Read More about Nyunwe Forest National park

Rwanda’s Akagera National Park located to the east of the country with the views of the plains of Tanzania stretches over a geographical size 1122 km2 and it is being managed under the arrangement of public-private partnership arrangement of the Rwanda Development Board and the African Parks from 2010.. Read More about Akagera National park

The Volcanoes National Park is an English of the former French naming the Parc Nationale des Volcanos which is positioned to the north-west of Rwanda sheltering the Rwandan section of the entire Virunga Volcanoes that comprise of eight (8) mountains shared by Rwanda along with adjacent countries of Uganda and DR Congo. Read More about Volcanoes National park

Kigali city is known as the largest in Rwanda and the main capital with a count of more than one (1) million people as of 2012. Kigali is recorded to be the main economic, political and social hub of Rwanda since her independence in 1962. The city shelters, the Presidential offices and residence along with a range of government ministries making it a centre of power in Rwanda. Read More about Kigali City Rwanda

1 Day Gorilla Safari in Rwanda is a short Rwanda Gorilla safari to trek mountain gorillas in Rwanda. Dubbed the land of a thousand hills, Rwanda presents a section…Read More

The 5 Days Gorilla Safari in Rwanda involves not only gorilla trekking but also wildlife viewing. The safari takes you to Volcanoes National Park where mountain gorillas…Read More

The 7 Days Gorilla, Chimpanzee & Wildlife Safari in Rwanda starts and ends at Kigali International Airport in Rwanda. It features a blend of primate, culture and wildlife….Read More

The 11 Days Rwanda Gorilla, Chimpanzee and Wildlife Safari is an extensive Rwanda safari encounter that allows you to explore the destination Rwanda in detail…Read More

The Wildlife Safaris in Rwanda presents memorable Rwanda safari experience that is exclusive of mountain gorillas. The Akagera National park in the east of Rwanda is the only gazetted Rwanda safari park that presents a congregator habitat for the myriad of wild game and flora that making it the ideal spot to undertake wild game viewing. The Akagera National Park features a myriad of wild game including; savanna elephant, the topi, the Cape buffalo, the zebra, the roan antelope, the defassa waterbuck, eland, the duiker, the bohor reedbuck, the oribi, the klipspringer, the impala and bushbuck which combine to make wild game viewing in Rwanda memorable. Our wildlife safaris feature history, culture, primate tracking including Chimpanzees and Black and White colobus monkey other than mountain gorillas, water recreation both on Lake Ihema and Lake Kivu and the general nature experience. Explore the wildlife safaris in Rwanda with Prime Safaris and Tours Ltd for the guaranteed safari memories. Find More about Rwanda Wildlife Safaris

2 Days Chimpanzee Safari in Rwanda to Nyungwe Forest National Park is a mini break perfect for a weekend spent out Kigali City. The Safari takes you to the largest montane forest…Read More

The 4 Days Rwanda Gorilla Tracking Tour with gorilla trekking in Rwanda and Uganda allows you to trek gorillas twice in two different habitats. The Volcanoes National Park in Rwanda…Read More

The 6 Days Rwanda Primate Safari is designed to enable you explore the Primates of Rwanda in detail. This Rwanda safari takes you to the Nyungwe Forest…Read More

The 7 Days Gorilla, Chimpanzee & Wildlife Safari in Rwanda with Lake Kivu is an extensive but relaxed safari that allows you to explore the National Parks, recreational, cultural…Read More

Time in Rwanda while Planning a Safari to Rwanda

Rwanda has no time difference that is posed by the summer and winter months. What should be noted that the destination Rwanda is two (2) hours ahead of GMT (Greenwich Mean Time) also known as the Prime Meridian. Read More about Planning a Safari to Rwanda

Which Currency to expect in Rwanda during Rwanda safaris

Rwanda uses Rwandan Franc abbreviated as RWF and it can be got at the Airport on arrival by exchange any foreign currency that you might have carried along with you or in any other foreign exchange bureaus in Kigali city. Find More Information about Rwanda

+250 is the Rwanda’s International Dialing Code and this is flowed by the respective number that you want to contact. If you are interested in making a call from Rwanda to outside world, you can dial 001 for the USA or 0044 for the UK. Telephoning can be made using the Rwandatel which is the largest Telecommunication Company in Rwanda. Know More about Rwanda

Food in Rwanda – What Food to Expect during a Rwanda Safari The Rwandan food differs from the ordinary to good. The Belgian inspired cuisine and fresh fruit are commonly good. It should also be noted that Rwanda maintains a considerable hygiene standards though variability in results. The local Rwandese cuisine features sweet potatoes, beans, corn, peas, millet, fresh fruit, such as Ovacadoes, Papayas and mangoes. The combination of Corn and Cassava locally named Umutsima, the combination of Cassava Plant leaves with spinach and eggplant named isombe and fried plantains named mizuzu are noted to be the poplar traditional dishes of Rwanda. The drinks include; local beer and a locally sorghum brewed beer named ikigage. More Information about Rwanda 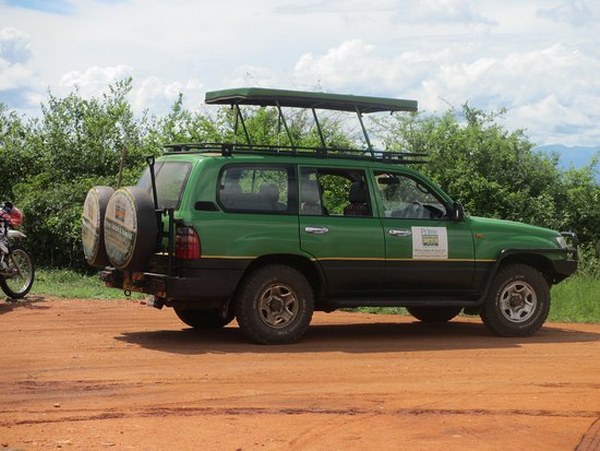 Self drive car hire in Rwanda

In Rwanda, if you have a 4WD Vehicle whether you intend to do a self-drive or take a driver, you can traverse the whole of it. The hilly landscapes at times present road sections that make the 4WD drive ideal. It should also be noted that most of the main routes in Rwanda are tarmacked but the road network in more rural areas tend not be tarmacked and are at times in poor condition. It would be more ideal to take a local driver who is well conversant the landscapes if you are visiting for the first time. Find More about Travelling in Rwanda