Commemorating the life of dian fossey 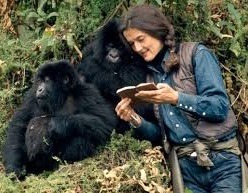 The day 16th January 1932, saw the birth of a child who would be remembered in the world of Tourism on an international Scene, Dian Fossey. Dian was an American zoologist, primatologist and anthropologist. During her childhood life, her parents divorced and she grew up in the company of a step father. She was a brilliant student during her time in school and was extremely interested in animals.
When she was a teen, she was a pre-veterinary student at the University of California. Unfortunately, Physics and Chemistry challenged her and then she  decided to concentrate on a degree in occupational therapy at San Jose state college and graduated in the year 1954. Dian had always had a dream of viewing wildlife and had photos of several destinations of Africa given to her by a friend who had visited magnificent breath taking continent.
Dian decided to put everything aside and focus on making her dream a reality. In 1963, she got a bank loan and began planning her first trip to Africa.
In 1963, Dian arrived in Kenya, a country at the coast of East Africa. Her dream of viewing the wildlife had come to life. She was amused by the different features and wildlife she viewed. She made a visit to Tanzania, Congo and Zimbabwe.
Later in 1967 Dian Fossey; arrived in Rwanda and set up a research center between Visoke and Karisimbi Volcano mountains, Karisoke Research center. The mountains are located in Volcanoes National Park, North of Rwanda. She named the center karisoke from the first four letters of Mt.Karisimbi, “Kari”, which overlooked the center from the south; and “soke” from Mt.Visoke in the north. This site is always explored by travelers on gorilla safaris in Rwanda.
The center was basically to concentrate on the behavior of the Mountain gorillas. Dian spearheaded a campaign on the conservation of mountain gorillas and mobilized resources to stop the act of poaching which was on going in Rwanda. The poachers saw her as a threat who was intervening with their act.
On the 27th December 1985, Dian was murdered, few weeks to her 54th birthday. It is believed Dian’s murder was because of her effort in conserving the mountain gorillas and campaign against poaching in Rwanda.
Robbery was not believed to be the motive for the crime, as Fossey’s treasures were found in her room like her handguns, passport, lots of dollars in traveler cheque and U.S bills. The final recording in her notebook read;
”When you realize the value of all life, you dwell less on what is past and concentrate more on the preservation of the future.”
Dian Fossey was put to rest near her research center, Karisoke which is in Volcanoes National Park in Rwanda. Next to her grave, is that of Digit, her best gorilla friend, who died in 1977.
Fossey’s life and effort to conserve mountain gorillas; well as fighting the act of poaching in Rwanda was portrayed in the movie “GORILLAS IN THE MIST”, a commemoration movie done by Universal Records.
There has also been set up of infrastructure to commemorate the hero; like the Dian Fossey hotel in Nyiramacibiri, Rubavu District, western province of Rwanda near lake Kivu; Organizations such as the Dian Fossey Gorilla Fund International, which basically aims at conserving the mountain Gorillas and fighting poaching in both Volcanoes national park Rwanda and Virunga National Park in Democratic Republic of Congo.
Dian Fossey’s history and great acts have made her a living testimony of conservation and a Rwanda safari product.