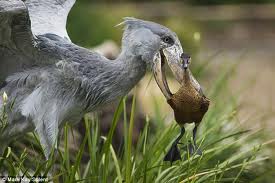 Queen Elizabeth National Park was gazetted as a national park and at the same time a game reserve in 1954, the park was gazetted as a national park in order to encourage research and at the same time to encourage safaris to Uganda. The park is located in the western part of the country. This park is recognized for its diversity of birds which total to 605 species which have attracted many birding safaris to Queen Elizabeth National Park, these birds can be viewed along the kazinga channel as you take the boat cruise.
These bird species at queen include; the verreaux’s eagle- owl, black bee eater, the shoe bill, papyrus canary, the so called martial Eagle, white tailed lark, the white winged warbler black rumped  and the known African skimmer. All these birds’ species have attracted many safaris to Uganda.
Queen Elizabeth is considered to be the largest protected area and a birding safari to Queen Elizabeth National Park can offer you a great experience in life. The birds can be viewed at Mweya main camp, which is separating kazinga channel from Lake Edward which has a clear view of Rwenzori Mountains.
Queen Elizabeth provides an opportunity of sighting the male birds trying to compete for female s attention, watching the elderly birds trying to look after their young ones from the nests. You will have an opportunity of watching the grey headed kingfisher, swamp fly catcher, African mourning Dove grey capped warbler and the beautiful black headed gonolek. These bird species   have helped to increase safaris to Uganda.