In Norther Zimbabwe is Mana Pools National Park a 219,600-ha wildlife conservation area, a pristine wilderness on the lower Zambezi River. Mana means ‘four (4)’ in the Shona language (the most spoken Bantu language in southern Africa) in reference to the four large permanent pools formed by the meanderings of the middle Zambezi river simply the park derives its name from the “four pools”. With this drainage system not drained to either the sea or ocean a Zimbabwe safari to this park offers the thrilling opportunity to canoe through one of Africa’s most pristine wilderness wetlands in the form of the forest-fringed Zambezi River and a network of associated pools. Referred to as pristine, this 2,500km2 of river outlook, islands, sandbanks and pools bordered by forests of mahogany, wild figs and baobabs is one of the least developed national parks in Southern Africa making it more intact.

By the end of 2018 basing on tourist reviews after Zimbabwe tours and safari experts, Zimbabwe was named the best place to visit on an African safari with Mana Pools National Park as the best place to visit in the country by SafariBookings.com. The online marketplace for African safari tours investigated by examining more than 3,000 reviews to find the winner of the best African safari country title and Zimbabwe took the title. This was for its scenic tapestry containing diverse wildlife found in few other places on the continent and with an astonishing 550 recorded bird species, was also rated the best country overall for bird-watching. Almost taking the same position and therefore coming second was Tanzania basing on reviews from travelers who had taken wildlife safaris in Tanzania with many visiting to Serengeti National Park.

What to see and do at Mana Pools National Park 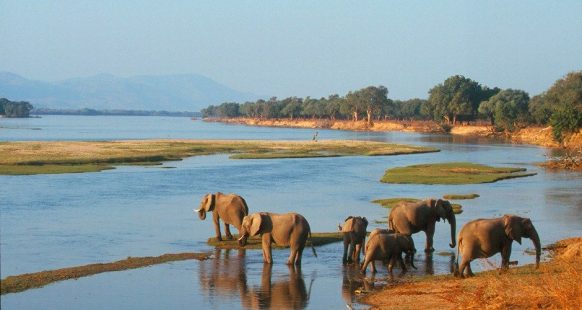 Whether you paddle or walk (the park is usually explored by canoe or on foot), expect to see an abundance of wildlife including the big four of the big five and these are Elephants (12, 000), Buffalos (16, 000), leopards and Lions. The Big five Africa’s wild animals are the five most dangerous animals to hunt on foot.

The park is also home to the country’s biggest population of hippopotami and crocodiles. The park also hosts the large dry season mammal populations of Zebras, Elephants and Cape Buffaloes. Species like the cheetah, Cape wild dog, brown hyenas and water-associated birds can also be sighted here on a Zimbabwe wildlife safari.

In the night, you can possibly sight the honey badger which is usually extremely secretive though can be seen close to the camps since they have become habituated to human presence.

Any time of the years is safari time but the weather at Mana Pools is at its most pleasant in the Dry season (April to October) rather than in the Wet season (November to March) when rain is a daily occurrence and humidity hangs in the air.

In the dry season, animals are easier to spot because the dry weather thins the bush and wildlife concentrates around the Zambezi River. As the lakes gradually dry up and recede in the dry season, the region attracts many large animals in search of water.

The dry season is the favorite for many safaris in Africa and therefore whether you opt for a Uganda wildlife safari, Kenya safari or any other kind of tour in Africa then choose the right season.

With its unique, wandering pools of the Zambezi river, to the iconic sights and sounds of Mana Pools National Park make this an obvious favorite to tour in Zimbabwe.