When you safari Uganda or undertake a Uganda tour in search for wildlife there 2 national parks that offer the best chances of seeing zebras and these are; 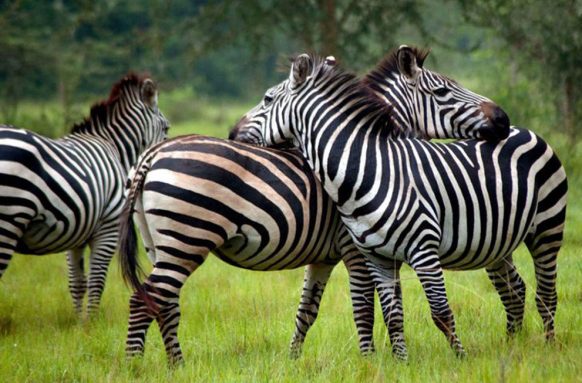 Lake Mburo National Park is the best Park for sure sightings of Zebras with the largest herds found in the country both inside and outside of the park. This is the best park for biking, horseback riding and nature walks in any way you decide to undertake your Uganda wildlife tour in the park, you can’t miss out on sighting zebras. The Zebras found here are the Plains variety that came from Tanzania. The extent to which zebras have thrived here has also facilitated their translocation to other areas such as Katonga Wildlife Reserve. If a traveler wants to tailor a visit to the park, it’s wise to tailor it to a Uganda gorilla safari to Bwindi Impenetrable National Park or wildlife safari to Queen Elizabeth National Park.

Kidepo Valley National Park is the most “un touched” safari in Uganda Park and still one of the best places to see zebras in Uganda. The Zebras in Kidepo Valley Zebras originally came from Kenya and have developed into a sub-species their distinguishing feature being that they become almost maneless as they mature. Kidepo National Park Uganda is some more than 400km from Kampala- Uganda’s capital making it one of the less visited parks, however our popular 3 Days Uganda Wildlife Flying Safari to Kidepo is an easy way to visit the park in a short time without going on a long road drive.

In accordance to the principles of embryology real/original color of a zebra is Black. White color is actually the strip around the main black background of zebras.

Even with a popular belief since the Medieval era that zebras had white bodies with black spots (The proof of this hypothesis lay in the fact that they had white underbellies), scientifically it is proven to be the opposite. In recent studies, Zebras are actually black with white stripes this is because Zebra embryos are completely black; the white stripes appear during the last embryonic stage. You can be keen on the underbelly of a Zebra on your wildlife safari in Uganda to prove this.

Each zebra specie actually has a different striping pattern! This is mainly due to selective pigmentation. With zebra embryos being completely black and the white stripes appearing at the last embryonic stage. The Melanocyte skin cells produce the pigments that give color to the fur.

This is where the hypothesis that zebras are black with white stripes makes sense, as the pattern is a result of pigment activation (black) and inhibition (white). This means that black is the actual color of the fur, and the white patches are simply the areas that have little or no pigmentation. The fact that the skin under a zebra’s fur is black further supports this conclusion.

Zebra stripes act as deterrent to flies and other blood-sucking parasites which confuses and discourages them from landing and taking a bite. Researchers from the University of Bristol and UC Davis, USA, spent time on a horse farm in Britain where they investigated the behaviors of tabanid horse flies around captive plains zebras and uniformly colored domestic horses using video analysis techniques. The discovery showed that the stripes don’t deter horse flies as such, especially at a distance, with both zebras and domestic horses experiencing the same rate of circling from the flies. However, video analyses revealed differences in approach speed, with horse flies failing to slow down on approach to zebras, which is essential for a successful landing. They therefore can’t land successfully on the zebra coat due to their low-resolution eyes.

A zebra’s stripes actually work as a camouflage to deter its main predators which are the lions and hyenas. Since the animals herd together, experts believe that the mass of stripes can confuse these predators by acting as an optical illusion that blends their figures together. Therefore, a herd of zebras can create an optical illusion of a giant mass, thus deterring any predators from taking on the herd alone.

These stripes help with heat regulation for Zebras since they spend a lot of time grazing on open plains, which means that they have to bear the intense heat for long periods of time. The zebras with the most prominent upper body stripes generally live in the Northern, equatorial region of their range, whereas those with less prominent upper body stripes are more commonly found in the Southern, cooler regions of the range. This geographic distribution supports the stripes’ utility as heat regulating tools.

Such a beautiful specie to glimpse at, zebras can be found all over East Africa. On a Kenya safari or Tanzania safari especially wildlife safaris in Tanzania tourists can see zebras alongside hundreds of other wildlife species. On a Rwanda wildlife safari especially at Akagera National Park tourists can also see zebras. This trip can be tailored to a Rwanda gorilla safari to the adjacent Volcanoes National Park which is the only gorilla safari Rwanda destination.