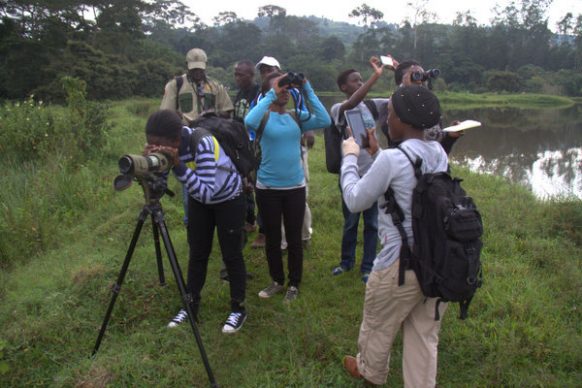 Heavily endowed by nature, Uganda is an ultimate birding/bird watching safari destination. Birding/bird watching in Uganda is a prime safari activity and one of popular Uganda safaris activities by avid birders across the world. Uganda is commonly known as the pearl of Africa an advantage gained from her diversity gained from the transitional position between the East African savanna, the West African rain forest, and the semi-desert of the north.

Uganda is exclusively adorned by a whole 1,072 Confirmed bird species! with 24 Albertine rift endemics and 1 country endemic; Fox’s weaver. The singing and whistling beautiful feathered savanna, forest, water, intra-Afro migrant, and Euro-Asian migrant(Palearctic) birds form almost 50% of Africa’s bird species and 11% of the bird species in the world. The Albertine rift has 24 endemics with some of them being the Rwenzori Turaco, Handsome Francolin, Willard’s sooty Boubou, Dwarf Honeyguide, Black-faced Apalis, Regal Sunbird, Strange Weaver, and many more unique bird species.

Bird species are diverse in Uganda because of the variety in habitats ranging from water bodies like Lakes, Rivers, deep valleys, marshes and swamps, African dense forests to open Savannah. The country has for long been the enthusiast birders leading destination because it offers easy access to several bird-rich habitats during Uganda birding safaris within its boundaries. 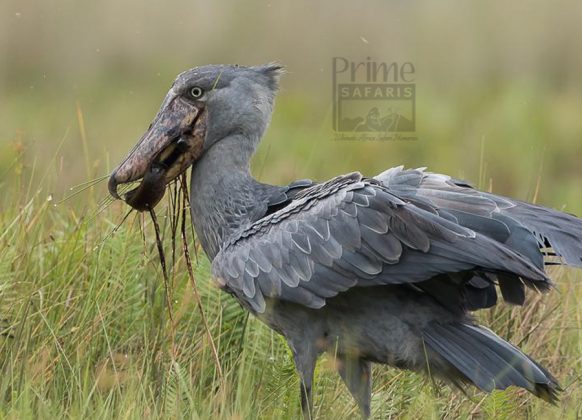 The sought-after bird species by tourists on bird watching tours in Uganda include, the elusive shoebill stork that is best sighted at Mabamba bay wetland at the edge of Lake Victoria-the world’s largest continental lake. The other bird species include the country’s endemic (it’s found only in Uganda) known as Fox’s weaver that can be sighted in Eastern Uganda wetland marshes in the vicinity of Lake Opera and Lake Bisina.

Uganda welcomes the Euro-Asian migrant(Palearctic) birds like the white-winged terns and Teals.

A few areas of the world can boost over 600 bird species but Queen Elizabeth National Park Uganda does so. The only chance for a birder on a Uganda safari to have a glimpse of both the East and Central African bird species is offered by Queen Elizabeth National Park.  A sample of the bird species to obviously be ticked on a bird-watching safari to Uganda include; the African mourning dove, swamp flycatcher, grey-headed kingfisher, African skimmer malachite and pied kingfishers. The white-winged terns, Grey-capped warbler, collared pratincole, Pin-tailed whydah, slender-tailed nightjars, black-headed gonolek, sedge warbler, papyrus canary, great white and pink-backed pelicans, yellow-billed stork, and many more live in the park.

Bwindi Impenetrable National Park was ranked the best birding spot by the Africa bird club, the leading organization concerned with the conservation and study of Africa’s birds. This park is well known for the thrilling Uganda gorilla safaris but still, one of the best Uganda birding safari spots since it’s home to 23 out of the 24 Albertine rift endemics.

Mabamba bay wetland is an extensive marsh stretching through a long narrow bay, fringed with papyrus towards the western main body of Lake Victoria-the world’s second-largest freshwater lake in Uganda’s Mpigi district. Mabamba bay wetland is one of the wetlands of international importance noted as an Important Birding Area (IBA) and one of the best marshy areas for birding safari Uganda tours. The wetland is home to recorded species of 260 birds with a population of globally threatened species and Lake Victoria basin biome species. The greater advantage of this birding spot is that it’s the closest birding place to Kampala-Uganda’s capital therefore all kinds of accommodation are guaranteed and one can tailor their safari for a Kampala city tour.

Mabamba wetland is the only other place and site so far rated as the best in Africa where the elusive shoebill (Balaeniceps rex) can be spotted at any one time of the day on top of Murchison Falls National Park.

Avid birders can only make the right choice for bird watching when they choose to tour Uganda. To increase on your bird list a Tanzania birding safari, Rwanda safari, Kenya safari or Congo tour can be tailored into your itinerary. To make the birding/ bird watching experience more exciting, tailor or combine it with wildlife and gorilla trekking safaris.