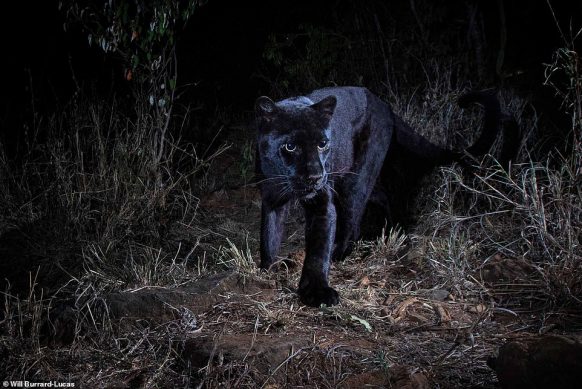 Black Panther has been the talk everywhere in recent years, however, catching a glimpse of the animals the famous superhero is named after in the African wilderness is a little un easy. The elusive black leopards well are existent and of recent a British wildlife photographer Will Burrard-Lucas captured on camera a black Leopard around Laikipia Wilderness camp- one of the popular Kenya wildlife safari destinations. After learning of several sightings in the Laikipia area of Kenya – the only area thought to have black leopards in all of Africa, Will Burrard Lucas decided to investigate further and set up an expedition in January. 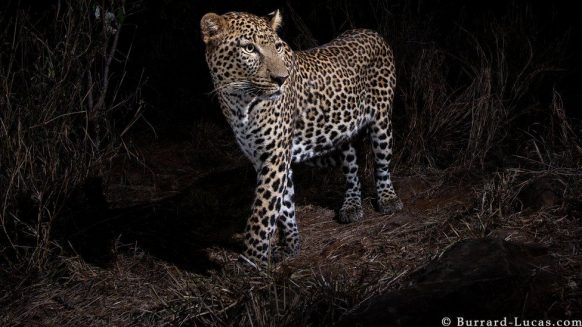 leopard seen with the black leopard

After following leopard tracks through the undergrowth with a local guide called Steve, Will Burrard Lucas set a few camera traps. After a few days of waiting in anticipation, on the fourth night his luck was in as he was able to capture rare photos of this gorgeous thought to be two-year old melanistic black leopard! Captured in the dead of the night with a full moon looming above, the juvenile was accompanied by a normal colored leopard which is believed to be one of its parents.

About the Rare Black Leopard

It would seem obvious to categorize the black Leopards on their own but that’s not the case, they still belong to known as Leopard (Panthera pardus) of the genus Panthera, a member of the Felidae family.

Its sooty/black coat is a result of melanism, the opposite of albinism that results in an excess of dark pigmentation. The black Leopard can also be referred to as a black panther because this is an umbrella term that simply refers to any big cat that has a black coat/pigmentation.

Melanism-the same thing that makes a house cat black, occurs in about 11% of leopards globally, but most of these leopards live in South East Asia with a few in east Africa making them sought after by Kenya safari photographers.

Therefore, a black panther is basically a melanistic big cat with its color as black and belonging to the genus Panthera.

It’s not basically that a black cat is from two black parents but as long as both parents carry the recessive gene for melanism.

There a very few images of these iconic, secretive creatures to confirm their presence here though they had been known to be existent.

“We had always heard about black leopards living in this region, but the stories were absent of high quality footage that could confirm their existence,” said Nicholas Pilfold PhD, lead researcher for a leopard conservation program in Laikipia County.

“Collectively these are the first confirmed (images are clear and detailed enough) images in nearly 100 years of a black leopard in Africa, and this region is the only known spot in all of Africa to have a black leopard.” He added.

After all, black panther and Wakanda are not just a fiction so let’s go have memorable safaris in the true African wilderness.