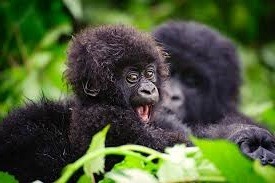 Bwindi Impenetrable National Park dubbed the safe haven for mountain gorillas in Uganda is located in southwestern part of Uganda. The park is safe place where travelers on Uganda gorilla trekking safaris enjoy their activities of trekking the mountain gorillas in the ancient Bwindi Impenetrable Forest that is franked along the borders between Virunga national park in Congo and on the edges of the famous Albertine Rift.
Spanning on a 331 square kilometers of jungle forests, Bwindi Impenetrable National Park in Uganda deserves to be explored by any traveller on Uganda safari tour. The park which derived its name from a local word “Omubwindi literally meaning Impenetrable, is occupied by the oldest, un explored tropical forest that dates back 25,000 years ago.This antiquity has produced in an incredible diversity of flora and fauna, even by normal rainforest standards. And we do mean rainforest; up to 2.5m of rain falls here annually.
Historically, in 1932, what are currently called the northern and southern parts of the Bwindi forest were the first areas to be established as Kasatora and Kayonza Crown Forest Reserves consisting of a total area of 20,700ha of land. No so long nearly in 1948, the two reserves were amalgamated and stretched into the Impenetrable Central Crown Forest Reserve covering 29,800ha. After some time, the two local forest reserves were then incorporated into the central reserve in 1961, increasing the gazetted area to 32,080ha. In the same year, the entire reserve was gazetted as an animal sanctuary in an effort to grant additional protection for the mountain gorillas which are were identified as resource that could attract many gorilla trekking safaris in Uganda. Bwindi was finally upgraded to a national park in 1991, along with the creation of two other mountain national parks in Uganda ie Rwenzori Mountains well known by many travelers who undertake mountain hiking safaris to Uganda and Mgahinga Gorilla national also famous as unique destination where tourists on Uganda Gorilla safaris can confront the mountain gorillas in Uganda.
Straddling in the beautiful Kigezi Highlands of south-west Uganda, Bwindi Impenetrable National Park is characterized by steep hills and narrow valleys with a general incline from the north and west to the south-western corner. This makes mountain gorilla trekking safari in Uganda’s Bwindi very interesting because it involves  hiking and slopping the valleys of Bwindi when searching for the mountain gorillas.
Due to its endowment with diverse habitats ranging from 1,160 to 2,706 m in altitude and its strategic location at the meeting point of the Albertine Rift and the rich Congo Basin, Bwindi national park is the most vital area in Uganda where tourists on their gorilla trekking safari tour to Uganda can have that opportunity to confront the unique natural species which are endemic to the Albertine Rift Valley.
The forest is acting as a natural home to almost half of the population rounghly 400 of the critically endangered mountain gorilla in the world. These have been habituated and opened for tourist’s on Uganda gorilla tours to visit while on their Uganda gorilla safari holiday to Bwindi. In addition to gorillas, the park also houses other primate species like the chimpanzees, monkeys, and other mammals like African Elephants among others. These are rarely seen by visitors On gorilla safaris to Uganda‘s Bwindi due to the dark hilly forests in Bwindi which offer dark hiding grounds for these species.
Uganda Safaris/Uganda Safari News
Prime Uganda Safaris and Tours Ltd