Suitably defined as ‘The Land of The Giants’, Chobe National Park north in Botswana is a 10,000km2 rich ecosystem with almost un comparable abundance of wildlife, birdlife and home to Africa’s largest elephant population, within diverse landscapes. Centered around the stunning Chobe River-far north east of Botswana at the border with Zimbabwe, Namibia and Zambia this park is one of the safari stunners and a must visit on a Botswana safari.

Chobe National Park is the most biologically diverse and first national park of Botswana. The original inhabitants of the now Chobe National Park were the nomadic hunter-gatherer San bushmen who moved from place to place in search of food. In 1913, the first idea to conserve and make this area a national park started, declared a non-hunting area the next year and expanded two years later with 31,600km2. How it reached to the now 10,00km2 started in 1943 when a heavy tsetse fly infestation occurred in the region delaying the creation of the national park till 1953 when 21,000km2 were suggested to become Chobe Game Reserve. It was officially identified as a reserve in 1960 only at 10,00km2 and finally declared a national park in 1967.

As a beautiful Botswana tour destination, the parks’ diversity is one that is much rewarding with the 4 distinct ecosystems within the area. The Serondela or Chobe riverfront area, Savuti Marsh area, Linyanti Marsh, hot and dry hinterland between Linyanti and Savuti Marshes do not only offer spectacular sceneries but are host to numerous wildlife species.

There many safari destinations and to a park within a diverse area it could not be enough for you to decide on visiting Chobe National Park. With the amazing biodiversity, abundant wildlife and much more here is to why you should tour Botswana;

Situated proximately to the borders with Zimbabwe, Zambia and Namibia, Chobe National Park is an easy day trip destination for visitors from several other safari destinations. The gateway to the park is at Kasane-a small town inserted between the Zimbabwe, Zambia and Namibian borders and the Chobe National Park. At the Kasane town is a small international airport which eases accessibility to the park and a good array of other services and amenities. Chobe park safari can conveniently be combined with a number of Botswana’s and other Southern African safaris to popular gems including the Victoria Falls seen on a Zimbabwe safari and still Botswana’s Okavango Delta.

Profusion of wildlife and Bird life in Chobe National Park

With a diverse eco system, Chobe National Park is surely home to big numbers of wildlife. There an estimated 120,000 elephants (Kalahari elephants-the largest in size of all known elephants) in the park-the biggest population in Africa. There are equally large herds of buffalo that can even be seen outside the park boundaries wandering around the outskirts of Kasane town not bothered by either traffic or people. Other wildlife species include lions that prey on African elephants and leopards with the Chobe river having an unbelievable abundance of hippos and crocodiles. During the dry season, the elephants halt in Chobe River and the Linyanti River areas making these the best areas for sighting. In the wet season, they make a 200km migration to the south-eastern stretch of the park. 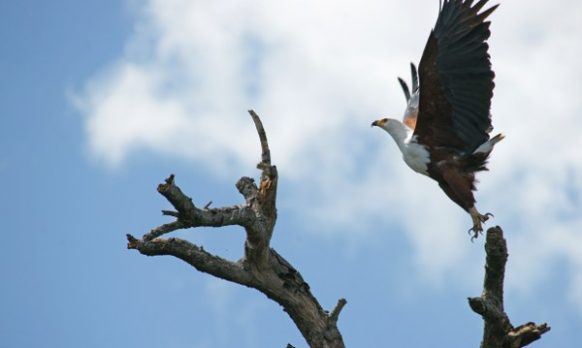 Botswana as a country supports an astonishing 550 recorded bird species with Chobe being host to about 450 bird species recorded within its borders. Including a number of particularly rare bird species the common species here include the African Darter, African Skimmer, Long-toed Lapwing, Saddle-billed stork and Squacco Heron. Boat trips on the river are excellent for checking off many waders and other water-associated birds since birds often let boats come very close making photography remarkably easy. There are many fish eagles on the river, and their call is one of the most iconic bird sounds of Africa.

No one wants to go on safari and yet still feel uncomfortable, at Chobe there is a variety of accommodation for tourists to relax from. Ranging from the picturesque campsites to remote luxury lodges, you can’t find something to match your interest. Chobe and the surrounding regions have a growing number of fantastic accommodation options with good amenities ready to make one feel at peace while on their trip. Most accommodations in Chobe and Kasane are found along the banks of the beautiful Chobe River allowing tourists to see a plethora of wildlife both in and out of the water without even having to leave the comfort of their hotel balcony.

A side from getting an accommodation hotel or lodge within Chobe, camping in Chobe is a true wilderness experience. All camps are unfenced and open to wildlife roaming through your camp.

Every safari destination is always unique and that’s what Africa offers with just the perfect experiences also gained on a Kenya wildlife safari wildlife safari in Tanzania or Rwanda wildlife safari. With a glimpse of the big five wild animals, a Uganda wildlife safari is never disappointing to both the savannah and tropical jungle forests. With the profusion of wildlife in Africa only three countries are home to mountain gorillas within and with out the continent and these are Uganda, Rwanda and the Democratic Republic of Congo.

Botswana may have many destinations for safari but Chobe National Park is the ultimate wildlife viewing destination.