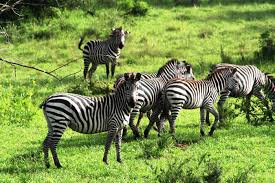 The Uganda safari National Park of Lake Mburo is located in the traditional rangelands of the Bahima pastoralists who inhabited the area right from the pre-colonial era. The area is comprised of an open savannah landscape dotted with scattered species of acacia wood which provided a perfect grazing ground for the Ankole Long horned Cattle, the unique breed of the Bahima which can be seen while on safari in Uganda.

Nshaara area like the whole of Ankole was hit by the Rinder pest epidemic which led to the massive loss of livestock and the resultant famine that claimed the good number of human lives. The decreased grazing pressure that resulted from decrease in cattle numbers led to the regeneration of vegetation and bushes in particular which ultimately resulted in the outbreak of tse tse fly infestation of 1910. The combination of these led to migration of the people particularly the Bahima pastoralists to other areas abandoning their traditional rangeland.

As a result, the colonial government established part of this wilderness area as a controlled hunting area in 1935 though regulated hunting and traditional human activities were allowed in this gazette. Unfortunately, after ten years another epidemic broke out with combination of Glossina morsitans which spreads Nagana to cattle and Glossina palpalis that spreads sleeping sickness to humans forcing the remaining populations of the people to vacate the area. The colonial government respondent by passing a decree that every wild animal in the area should be exterminated to starve the blood sucking tsetse fly which would lead to its extinction and its final eradication. This was during 1950s. It should be noted that this strategy did not yield positive results since elusive animals like bushbuck and the duiker could not be totally exterminated thus providing food for tsetse flies.

In return, the authorities adopted another strategy which included eradicating all the shady bushes and trees to get rid of tsetse fly hideouts and this resulted in to cutting and burning of substantial square kilometers of bush in this area however the quick establishment of secondary undergrowth rendered the strategy useless. Determined like never before, the colonial authorities declared that every inch of Ankole should be spread with insecticide and teams of local people were employed to do this which eventually resulted in the extermination of tsetse fly species in the Mburo area though at a great cost to the ecology since the insectivorous birds, small mammals and other insects could not with stand the killing power of the applied chemicals.

In return, the Bahima pastoralists started to come back to their traditional beautiful place which they had dubbed Kaaro Karungyi – the beautiful settling land. The Authorities recognized that the remaining wildlife had to be protected and the area was up graded in to Lake Mburo Game Reserve though the pastoralists were allowed to access the water points in the park that is Lake Mburo which is the only permanent water source in the area – which apparently provides a boat recreation activity for Uganda safari undertakers.

The conservation efforts in Uganda at that time were very weak which made the communities to encroach greatly on the game reserve resources. The wildlife that was recovering from the previous massacre were now being poached by the farming communities mostly from Koki while the lions were at cross roads with herds men over their cattle and for their long standing fame as man eaters that had terrorized the locals in 1960s. In fact one re-known male lion locally known as Kamuhegyeyo claimed the lives of about 80 people during that time and thus with this back ground, the locals were not ready to dine with them again which resulted into their extinction – a reason why they cannot be seen in Lake Mburo National Park while on safari in Uganda.

When Obote returned to power in 1980, he evicted 45,000 families that had re-settled in the reserve without compensation in 1983 and he upgraded the reserve to Lake Mburo National Park maintaining the boundaries of the former reserve. Unfortunately, enforcing this move was too difficult since it was a turbulent time when the NRA bush war had reached its peak and by 1986, the Lake Mburo National Park was more less like any other community and was fully resettled to the maximum leading to the destruction of park infrastructure and intended poaching with the aim to exterminate the wild animals which the locals viewed negatively to have caused their suffering.

After the change of guards in 1987, the NRM government degazetted the park by 60% to accommodate the people that were displaced by the war. The new boundaries of the park were established and the people continued to roam around it with illegal grazing and poaching. All this happened because the locals were not aware of the importance of this protected area and viewed it as a waste land.

The turning point came in 1991 with the establishment of Lake Mburo Conservation Unit with support from Africa Wildlife Foundation when a representative from every neighboring parish was appointed to participate in crafting of the future of Lake Mburo National Park. This was the beginning of community approach in the management of Lake Mburo National Park.  From then, the revenue sharing scheme was introduced with 20% of the Park entrance collections going to the surrounding communities which has contributed in building of health centers and schools which can be evidently seen in Rurambira while on Uganda safaris. The local people have been incorporated in the park management and have been given priority in the recruitment of tour guides and in decision making, controlled resource use is permitted like medicinal herbs collection and access to water points in the dry seasons is allowed through the designed corridors. This in return has changed the perception of the local people about the park and one can say that the future of the park is much brighter than it’s past.

Visiting Lake Mburo National Park is one of those rewarding decisions that you can have while planning safaris to Uganda. Its amazing populations of Zebra, Impala, Eland, Bush buck, duiker, buffalo, amazing birds like African fin foot, Crested crane, great scenic landscapes dotted with great acacia species and the entire heritage that surround it vested in the protruding ancient rocks like Ruroko and Rwakobo combine to make your Uganda safari memories a remarkable treasure. The park can also be visited alongside your gorilla trekking safaris to Bwindi Impenetrable National Park, Chimpanzee trekking safaris to Kibale National Park or wildlife safaris in Queen Elizabeth National Park.