Nestled in the Albertine Rift at the northern base of the Rwenzori Mountains, the forested Semuliki National Parks Valley is a haven for rare birds and mammals. This alone has put on top Uganda’s most visited destinations by people on Uganda birding safaris during their Africa safari holiday. Semuliki National Park protects an eastern extension of the Congolese Ituri Forest making it one of the alluring ornithological destinations in Uganda, with roughly 400 recorded species being Guinea-Congo biome endemics known from no other locality in East Africa. 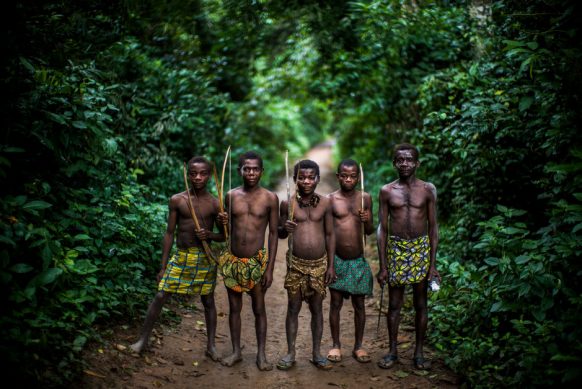 When we trace the roots of the stone age period, the closest relatives to the stone-age people in Uganda are the Batwa and the Bambuti. The Bambuti are often referred to as pygmies and they are believed to have been the original inhabitants of the Rwenzori Mountain areas before the arrival of the Bantu. Their original home is said to have been the Congo forest. Their language is called Kumbuti. It is said to be very complex and difficult to learn.

Although some people believe that the Bambuti pygmies are closely related to the Batwa around Mgahinga Gorilla National Park and Bwindi Impenetrable National Park. These people are even smaller in number than the Batwa Pygmies and have more interesting activities that include growing and smoking of marijuana. The similarity between the Bambuti Pygmies and the Batwa Pygmies is that they all once lived within Forests, were hunter-gatherers and were all evicted from their ancient homes.

The way of life of the Bambuti

The Bambuti are nomads always on the move from place to place, hunting and gathering. They are said to be cannibals and their average height is about 1.5 meters. They have a light bronze colour and a beautiful complexion. They have the same curly, woolly hair as their Bantu neighbours. Their faces are broad, their nostrils wide and their lips are extraordinarily thick.

Their huts are built in the same model as Bantu huts but are made of leaves, not grass. They round, very short, and with a small entrance so small and low that they crawl on their hands and knees when entering and getting out. Their huts are temporary due to their nomadic life.

Their diet is basically composed of meat. Often, they supplement it with bananas and sweet potatoes which they obtain by bartering meat for them with Bantu neighbours. They obtain their food by hunting and they are very skilled at it. When in the forest hunting, a dozen of them will make less noise than that of the animal being tracked.

Their dress is composed of a belt wore around the waist, with a piece of bark cloth attached to the belt in the middle of the back, brought down between the legs and fixed against the belt front. This type of dress suits both men and women but it is not very common for the Bambuti to put on clothes.

The Bambuti‘s economy is just as simple as their general way of life. They are wanderers by nature with no fixed residence. Their chief means of subsistence is meat and the forests where they live abound with elephants, monkeys, lizards and some antelopes. The Bambuti prey on these animals and several others which the forest contains.

As one would expect, the Bambuti have no home industries. Their mode of life is purely subsistence and they do not seem to be troubled by lack of home comfort. If a Mwambuti can find somewhere to sit and skin to sleep on if he has eaten and drunk he finds nothing to trouble the world for.

When on their normal travels, the women carry all the family property. They also do all the work including construction of huts. The man only carries his spears and arrows. The men do the hunting and really excel at it.

For visitors on short Uganda wildlife safaris, the main focal point on their safari Uganda to Semuliki is the steaming Sempaya hot springs, which are reached via a short walking trail along which a full seven species of forest hornbill may be seen, among them the immense black-wattled hornbill, along with the likes of Nkulengu rail and swamp greenbul. Common primates include grey-cheeked mangabey, red colobus, black-and-white colobus and red-tailed monkey, and bush pig, forest buffalo, chimpanzee, sitatunga, white-bellied duiker and water chevrotain are also present.

Batwa pygmies are previously a full hunter-gatherer tribe who lived in caves and trees of the forests for hundreds of years. They are restricted to the mountain range areas of Bwindi Impenetrable National Park Uganda and the Virunga massif. Most of the pygmies have a height on average less than 150 cm (4 ft 11 in) tall.

The Batwa previously lived for hundreds of years in the jungle with the mountain gorillas before they were set to live outside the forest for conservation. As the original dwellers of this ancient jungle, the Batwa were known as the Keepers of the Forest. A relatively large number of the Batwa are still existent in the southwestern part of Uganda’s Bwindi impenetrable national park and Mgahinga Gorilla National Park Uganda. These are the only destinations for Uganda gorilla safaris or otherwise known as gorilla trekking safari in Uganda.

Batwa people survived by hunting small animals using arrows or nets and collecting plants and fruit in the rain forest. They lived in huts made of leaves and tree branches and didn’t live in a specific place. For years the Batwa lived in harmony with the mountain gorillas and today they are part of the conservation process as they take Uganda gorilla safari visitors through their olden treasured home.

In a bid to conserve the diverse Bwindi forest, the Batwa were relocated to the lower slopes of the mountain. In need to preserve their culture, the Batwa started the Batwa experience as a way of sharing their culture with the rest of the world.

Today, the Batwa communities are benefiting from tourism and making a living that keeps them away from poaching and turns them towards conservation of the forest and the wildlife. They entertain Uganda gorilla trekking safari tourists with their traditional dance that you are free to join.  Taking you through the life of this unique tribe is more than watching any historical documentation since history unfolds just in your presence.

Having this experience will leave you with memories of a great unique culture that remained to be hosted by the foothills of the tropical rainforest. To have a great experience plan a safari with a gorilla safari tour operator in Bwindi impenetrable national park and have a chance to relax with these amazing people.

How the Batwa cultural tour experience is done

This very enjoyable walk lasts about 3 hours with about 3 Batwa guides. During this walking tour, the Batwa demonstrate to you hunting techniques, how to make bamboo cups, gather honey, point out medicinal plants and demonstrate all survival skills. You will finally be taken to the sacred Ngarama Cave which was once home to the Batwa King, where the women of the community perform a sorrowful song which echoes in a strange and sorrowful way around the depths of the dark cave. This experience will leave you with a striking and moving sense of the richness of a unique culture that is slowly fading away.