A Brief About Serengeti National Park A safari tour Tanzania to Serengeti National Park takes you to the land that runs forever or you can call it the sirenget just like the native Masai do. 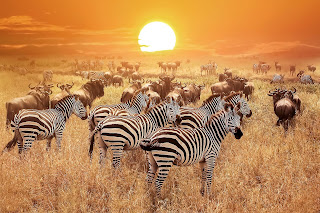 A Tanzania wildlife tour to Serengeti National Park, well as it local names says, Serengeti National Park is really a land that runs forever and as a result its home to close to 2 million wild games hence if you choose to come to a wildlife tour Tanzania in Serengeti national park expect to be in close company of at least 2 million wild friends and some of these include Africa’s big 5’s i.e. lions- Serengeti has the biggest lion population in Africa which stands at 3000 individuals, leopards- there are about 1000 of these night stalkers roaming the Serengeti grasslands, rhinos, buffaloes and elephants about 5000 of these land giants are present here. All these make up the big 5’s of the African wilderness. Other mammal species here include 250000 plain zebras, about 0.5 million Thomson’s and grant’s gazelles, topis, Masai giraffes, impalas, warthogs, common elands, lesser kudus, klipspringer, roan antelope. 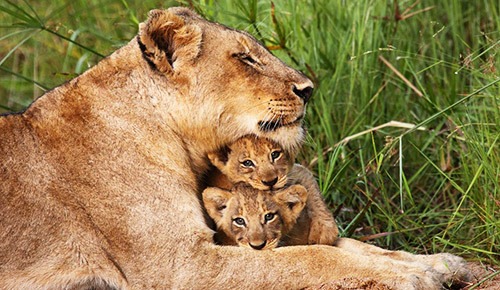 About The African Lion in Serengeti National Park

Pride is always led by a dominant male and their highly territorial animals controlling vast expanses that are strategic with a lot of prey and water. Male dominant lions are responsible for protecting the pride and they will fight off other male invaders, in case the dominant male is defeated by the invading lions, the victor lions will kill off all the cubs that are offsprings to the defeated dominant male as a way of ending its blood lineage.  Lions are carnivores and are at the top of the food chain feeding on almost all browsers and grazers within their domain due to their ability to hunt as a pride and carry out well-coordinated and planned attacks which enables them to take down prey that can even be between 2-4 times bigger than them such as zebras, elephants and buffaloes. Lions usually hunt at night because of their well-developed sense of sight especially at night where their vision is almost 6 times better than that of humans due to the presence of white patches around their eyes which enable them to absorb even the smallest amount of light available during the cover of darkness. Hunting among lions is an affair carried out by female lions mostly and juvenile males and when a kill has been made by the lionesses in a pride, it’s always the dominant male lion who will eat first up to his fill then the rest of the pride will feed on what has remained after the he has finished eating. They have a gestation period of 97 days and a life span of about 10-14 years.