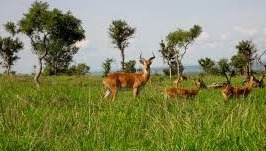 Uganda the pearl of Africa is blessed with different game reserves were some of the wildlife species and bird species are conserved and protected .Pian Upe is one of the Outstanding wildlife reserves in Uganda acting as home to different rare species of wildlife and this has made the reserve to become one of the tourism destinations where travelers on Uganda safaris spend their wildernesses encounter when in Uganda the pearl of Africa.
Exploring Pian Upe is that unique opportunity travelers on their safaris to Uganda should not miss because the chance enables you to explore the second largest protected area in Uganda after Murchison falls national park. The reserve is located in the great Karamoja region and it convers an estimated are of roughly 2788 square kilometers on the northern side of famous mountain Elgon which is the only mountain with the eighth highest peak in Africa. Therefore taking Uganda safari to Mount Elgon will widen your chances to link to the Pian Upe wildlife reserve.
Pian Upe Game reserve is unexplored destination in Uganda and hence taking safari tour to Uganda’s Pian Upe will make you to be among the first world travelers to explore the virgin pristine Pian Upe game reserves located in Mountain Elgon’s outskirts . Travelers on this part of Elgon will have chance to enjoy the views of different wildlife like giraffes, Harte beast, lions as well as the species of the leopard, savannah zebras, topi ,buffaloes and the greater kudu, Orib, plus the only remaining numbers of roam antelope in the whole of Uganda. Pian Upe game reserve is an endowed reserve in the whole of east African region and this makes the reserve to be the only protected area where traveler on Uganda safari tour can easily watch the rare species of the Rothschild’s giraffe.
In addition, the reserve is birders haven in Uganda and hence it’s the perfect place for any world bird lover planning to undertake birding safaris in Uganda. The list of the remarkable bird species which can be easily viewed in the areas covered by the game reserve include rare Ostrich, great Hartlaub’s Bustard and the unique Jackson’s Hornbill, the white-headed buffalo- weaver are these different bird speces can be sighted in the Loporokocho swamp.
Besides the birds, the game reserve is also home of different primate species such as the vervet monkey as well as the rare olive baboons. The presences of these primate species diversifies the experience one gets if he or she books Uganda safari to Pian Upe game reserve in the North Eastern Uganda. Pian Upe is also acting as habitat to the tremendous rock pythons and its home to the largest lizards identified as Savannah monitors. All these can be enjoyed by traveler who decides to undertake safaris to Uganda’s Pian Upe game reserve.
Uganda Safaris / Uganda Safari News
Prime Uganda Safaris and Tours Ltd