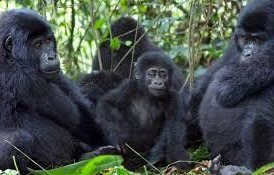 Habinyanja group of gorillas is one of the interesting three Gorilla groups thriving in the famous Buhoma gorilla trekking region in Bwindi Impenetrable national park. This outspoken gorilla troop in Buhoma can be accessed by trekkers on Uganda gorilla safaris from Nyamishaba village where the trail head is positioned.
Habinyanja Gorilla Family was first habituated in 1997 and received its first time trekkers in 1999. Habinyanja Group was named basing on Rukiga word “Nyanja” which literally means “a place with water”. The reason is that, it was first sighted next to the swamp ponds in Bwindi Impenetrable National Park .The regular members of Habinyanja family include Makara, Rwansigazi, Kisho, Maraya, Nabukye, Binyonko, Rugyendi, Nyamuhango, Elsa, Hamusini, Hakato, Gacyaro among others.
During the time of habituation, the group was led by the dominant Silverback Mugurisi, which means “Old man”. After his death, the two brothers Rwansigazi and Mwirima shared leadership of the group. However, they were so different that they couldn’t proceed. Rwansigazi was an adventurous gorilla and so much preferred traveling, while Mwirima liked to stay at one location. It was therefore unavoidable that in 2002 the two prominent silverbacks decided to part ways without any power struggle. The gorilla members that followed Rwansigazi retailed the name Habinyanja and the members that stayed with the unadventurous Mwirima came to be identified as the Rushegura gorilla family.
After some time, Rwansigazi silver back surrendered leadership to Makara who is now the lead silverback of the Habinyanja gorilla family. In some instances, the two Gorilla groups still meet each other and they spend some time peacefully.
The Habinyanja gorilla group is characterized of power struggles, intrigues within the group coupled with individual members who are willing to fight for their individual interest at the expense of group interests. Trekking this particular gorilla family while on your gorilla trekking safaris in Uganda will offer you life time experience of encountering these world endangered species of Mountain gorillas.
Uganda Safaris / Uganda Safari News
Prime Uganda Safaris &Tours Ltd