Chimpanzees stand alongside gorillas as Africa’s only great apes and are the closest living relatives of humans, thus in Chimpanzee Safaris in Uganda are often compared with Uganda Gorilla Safaris. The common chimpanzee (Pan troglodytes) is the best known of two species – the other being the bonobo, which is smaller, less aggressive and forms female, rather than male-dominated societies. Uganda safari visitors are always amazed by the close affinity of chimps with humans that is evident in many aspects of their behaviour, from their large brains and complex social intelligence and communication skills to their ability to fashion and use tools. It is also seen in the many ways in which people have exploited them, whether as objects of circus entertainment, or subjects for a laboratory experiment. Both the chimp species are confined to the equatorial rain forest, with the common chimpanzee ranging from Cote D’Ivoire in the west, across the Congo Basin – north of the Congo river – to Uganda and Tanzania in the east. An estimated 150,000–300,000 are thought to remain in the wild. In Uganda, Chimps are Habituated for human experience and visiting and are common in Kibale forest National Park – Kanyanchu area and Queen Elizabeth National Park – Kyambura area. 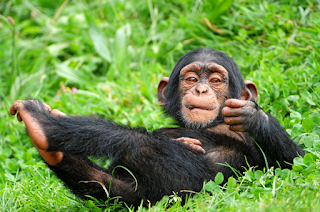 Uganda is home to the “Primate capital of the world”; Kibale National Park Uganda. This back habits over 13 primates in its forest. Kibale Forest National Park is open to tourists on Africa safaris to enjoy their holiday. Undertake a Uganda safari to this park and enjoy a Uganda chimpanzee trekking safari. Chimpanzee trekking safaris in Uganda are carried out twice a day, in the morning and in the afternoon. The activity itself lasts about 4 hours depending on where the chimpanzees are as well as the time of the day. It is a very interesting activity for you will enjoy time in the forest as you watch man’s closest cousin mimicking you, giggling, jumping from branch to branch and many more. They are more active during morning hours than in the afternoon.

Although chimpanzees are very similar to humans, there is still much that we don’t know about them. Some people confuse chimpanzees with. Chimpanzees lie in the great apes’ family including gorillas, bonobos and orangutans. Here are facts you must know about our closest living cousins in the animal kingdom.

Because they are so much like us, they are referred to as our closest living non-human relatives or man’s closest cousins. We share over 99% of our DNA with these chimps. As many experts say we are 99% chimpanzee, chimpanzees are also 99% human. This shared genetic make-up reveals itself in many physiological and behavioural traits that give us an incredible look into human evolutionary history. 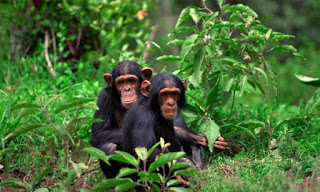 One of the early discoverers; Dr Goodall’s discovered that chimpanzees make and use tools. He observed one of the chimps named David Greybeard using a stick he had stripped of its leaves to reach termites deep within their mounds. When he pulled it out of the mound, termites had clung to the stick. So the chimp picked them off with his lips for a protein-packed snack.

Chimpanzees may look cute, especially when they are babies, but they can be very aggressive. Groups of males have the ability and motivation to plan and execute attacks on other chimps in the forest. These fights often result in serious injuries and even fatalities. Sometimes they even attack man; fatal attacks on humans have also been reported.

Just like humans, chimps have been observed grieving over friends and family members. They visit the body, both individually and in groups, gently touching, sniffing, and grooming the deceased.

We aren’t descendants of present-day apes, but there’s a chance that we share a common ancestor

People think that they are descendants of the present-day apes; chimpanzees, gorillas, or any other great ape. This is not right because the evolutionary theory suggests that we share a common ancestor; an ape-like-human-like creature that lived millions of years ago.

Chimpanzees enjoy an occasional dip though they can’t swim

Once you spot a chimpanzee in water, you’ll rarely see it paddling about in the water as they don’t like to swim. Their low body fat ratio causes them to sink in the water and their top-heavy body composition makes it difficult for them to keep their heads above water. However, some chimpanzees do enjoy a good splash around in shallow water.

Dr Goodall discovered that chimpanzees not only fight but engage in a primitive form of brutal warfare. The first-ever recorded long-term war broke out in 1974 and lasted for four years. 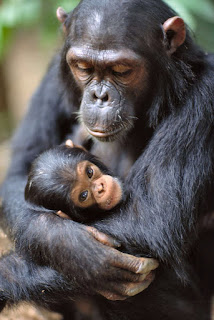 Chimpanzees enjoy many of the same foods humans do

Just like humans, Chimpanzees love honey, watermelons, and figs too. Check out their most eaten food!

Chimpanzees are classified as Endangered on the IUCN Red List. At the beginning of the 20th century, there were more than 1 million chimpanzees in the wild. Today, it’s estimated that there are less than 300,000. Their numbers are decreasing because of habitat loss and fragmentation, commercial bushmeat hunting and the illegal wildlife trade. Thought they are endangered, Kibale National Park Uganda has the biggest number of them

Monkeys have tails but chimpanzees and other great apes do not.

Advice to Travellers – Postpone your trip, Do not cancel

We are aware that many travellers and Uganda Tour Operators like prime Safaris & Tours Ltd have been affected by this virus. Tourists have cancelled their safaris in Africa e.g. Uganda safaris because their countries are in category 1. Flights have been grounded in some c

ountries so transport to other countries is not easy. There are many strict regulations that countries have put in place to regulate the spread of the disease including self-quarantine at your expense.

We, therefore, advise tourists that had booked Africa safaris to postpone their Uganda tours, Rwanda trips, Kenya safaris, Congo tours, Tanzania safaris or any other tours in Africa to a later date when the situation is calm than making a huge loss of money.

Looking forward to going for a trip after this is all over, think of the prominent Africa safari destinations like Congo, Rwanda, Tanzania, Kenya among the many where you will enjoy adventurous activities like; Congo safaris offer you chance enjoy a Congo gorilla safari in Kahuzi Biega National Park to trek lowland gorillas or a Congo gorilla trekking tour in Virunga National Park to trek the famous Mountain gorillas.

Kenya safaris offer Kenya wildlife safaris that bid you the chance to visit Masaai Mara National Park and many others.