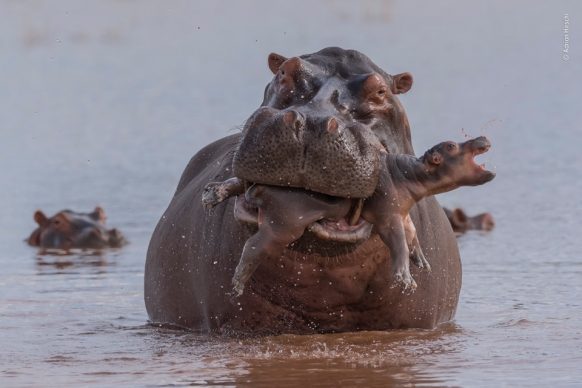 A couple of tourists set out for their Africa safari/ Africa tour in Zimbabwe. Their Africa safari tour/ Africa adventure safari was amazing especially when it came to their boat ride along Lake Kariba. With an area of about 5400 square kilometres and 200km length, Lake Kariba is the world’s largest manmade lake and reservoir by volume. It is home to several types of fish as well as other water-loving creatures including hippos.

During their boat cruise, they came across a big group of hippos. They slowed down their boat so they could have a look at them for a while. They noticed that there was a mother with her newborn baby in the shallow waters of the lake close to the bank. After a while, the two were attacked by a large bull. This bull tried to crush down the baby hippo to death, tired drowning it and after a while, it then seized the newborn hippo in his huge mouth. In a lot of motherly pain, all the while, the distraught mother looked on.

Male hippos are also aggressively territorial, and brutal fights are not uncommon. This was shocking as it is rear among hippos. Study says this may be as a result of stress caused through overcrowding or a male may also increase his reproductive chances by killing young that are not his, triggering females to go into oestrus, ready to mate with him.

Hippos are very aggressive and are considered very dangerous. They have large teeth and tusks that they use for fighting off threats, including humans. That’s why sometimes, the young fall victim to adult hippo tempers. During a fight between two adults, a young hippo caught in the middle can be seriously hurt or even crushed.

Hippos are social beasts, hanging out in groups called schools, bloats, pods or sieges. Schools of hippos usually consist of 10 to 30 members, including both females and males, although some groups have as many as 200 individuals. No matter the size, the school is usually led by a dominant male. Uganda may not be your next desired travel destination but you may still be interested in hippos, visit Tanzania/ safari Tanzania/ Tour Tanzania for a Tanzania wildlife safari to Katavi National Park and Serengeti National Park.

Visit Rwanda’s Lake Ihema and Akagera National Park on your Rwanda wildlife safari/Rwanda wildlife tour/ Rwanda gorilla tour to have a glance at some of the biggest concentrations of hippos in Africa.

You may be destined to travel to Kenya! No worries, you will still enjoy your Kenya safari/ Kenya tour if you booked a Kenya wildlife safari/ Kenya wildlife tour that goes to Masai Mara Wildlife Reserve and Lake Naivasha. You will see big concentrations of hippos in the Mara River.

Description of a hippo 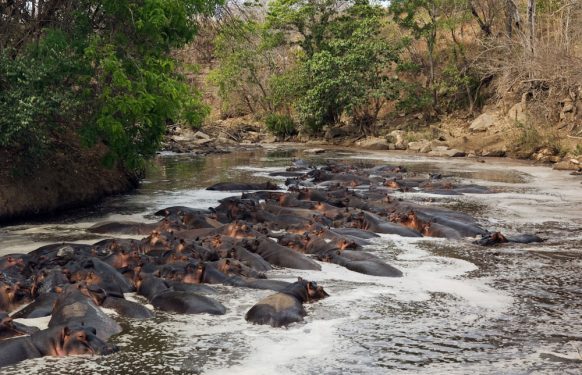 Hippos have a unique shape and size. A hippos’ skin is dark grey and smooth, pink. The head is large with a broad mouth in which the upper and lower canine teeth and incisors are enlarged into tusks. The eyes and ears are small and set far back on the head. The fat and bulky body are set on short, broad legs. The neck is short and thick characterized with folds.

Hippos live or can be found in sub-Saharan Africa. They live in areas with abundant water, as they spend most of their time submerged to keep their skin cool and moist. Considered amphibious animals, hippos spend up to 16 hours per day in the water.

If you do your Africa safari tour during the time of cool weather you are very likely to see them sunning themselves on river/ lake banks. And you are likely to see them wallowing in mud holes only when there is no water available. If you go on a guided night drive safari you can spot them grazing on land.

Hippos have a herbivorous appetite. The adults can feed up to about 80 lbs. (35 kg) of grass each night, travelling up to 6 miles (10 kilometres) in a night to get their fill. They also eat fruit that they find during their nightly scavenging. If food is scarce, hippos can store food in their stomachs and go up to three weeks without eating.