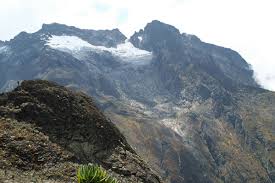 The Mountains of the moon (Lunae Montes) as described by the Greek geographer Ptolemy in 150AD stand in the west of Uganda marking the border with the Democratic Republic of Congo form one of the epitome attractions that are always visited by travellers on Uganda safaris and tours. The Rwenzori Mountains besides being the third highest mountains in Africa towering to 5,109m above sea level, they are also the highest mountain range in Africa since Mountains; Kilimanjaro and Kenya are stand-alone features.
The Rwenzori Mountains have got amazing and unique feature about them. Despite their closeness to the world’s main latitude – the Equator meaning that it close to the sun, the mountains have got dense ice sheets that have for long formed the reservoir for the prominent glaciers which have always left Uganda safari undertakers in a state of wonder.
Strolling down the slopes of Rwenzori Mountains marked by world impressive flora that qualified it as a world heritage site in 1994 by the United Nations Educational Scientific and Cultural Organization (UNESCO), the glaciers marked by natural clear waters make their way down forming glittering streams on the mountain slopes that appears to be like lime painted on an object creating a lasting impression that will take the memories into the another world full of natural beauty refreshing past routine and opening you to another chapter of encounter with nature. This is one of those encounters that should not be left out while planning a safari to Uganda.
The Rwenzori glacial rivers drain into the adjacent Lake George which has got Kazinga Channel as its outlet. Unfortunately, as a result of climate change and global warming effects, Rwenzori glaciers are receding and there is a threat that they might disappear altogether if the trend remains like this.
Uganda safaris/Uganda safari News
Prime Uganda safaris & Tours Ltd