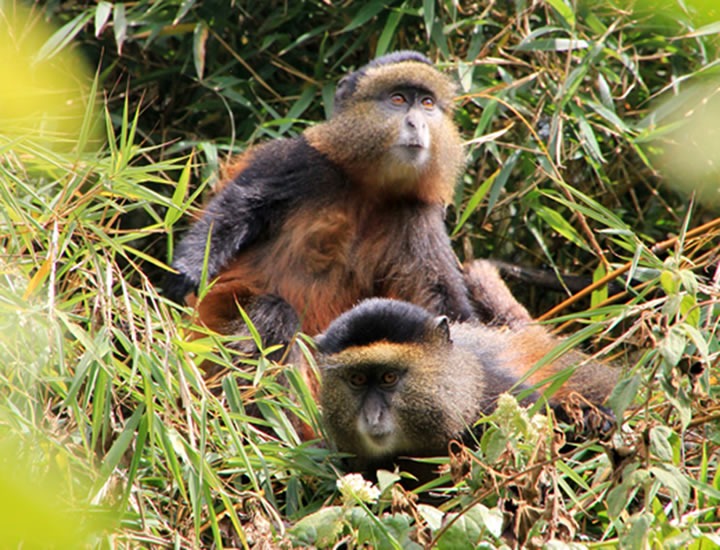 The Golden Monkey (Cercopithecus Mitis Kandti) is a local subspecies of the widespread Sykes Monkey, also known as the “Blue Monkey” and is endemic to the high-altitude forests of the Virunga massif. This is a little known bamboo associated taxa primate listed as endangered by the World Conservation Union. Mgahinga Gorilla National Park offers the chance to trek golden monkeys which are endemic to the Albertine rift. Golden monkeys are characterized as a bright orange-gold body, cheeks and tail, contrasting with its black limbs, crown and tail.

Golden monkeys are a beautiful sub species of monkeys from their golden coat, long tail to the playful and intrusive character. They spend most of their time leaping from bamboo branches or skipping on the forest floor in a manner that offers lasting memories to those who decide to go golden monkey trekking. Their amazing and impressive character has made golden monkey trekking one of the popular Uganda safari activity most especially tailored to Uganda gorilla trekking safaris.

A 2003 survey estimated a population of 3,000 – 4,000 golden monkeys in Mgahinga Gorilla National Park, a good number to guarantee their sighting during a Uganda tour. This is the only national park in Uganda with the golden monkeys and the only park where silverback gorillas co-exist with golden monkeys a reason the park won itself the slogan, where gold meets silver.

Golden Monkey Trekking begins at 8:00 am local time in the morning with an orientation just like on many other Uganda tours and then after you head to the forest along what is referred to as the Gahinga Trail. When you get into the presence of the Golden Monkeys you will know it, the forest comes alive with monkeys everywhere, even jumping over you, and the commotion of Monkey activities will be amazing. The monkeys dictate how the day is going to be, and no day is ever the same in the forest, the experience is unique to each safari to Uganda tourists.

The golden monkey experience is not as exhausting as is Gorilla Trekking since Golden Monkeys do not move around and build new nests each day. They remain pretty well in the same area making it easy to get to them. On seeing the golden monkeys you spend a maximum of 1 hour then leave the forest.

If you would love to spend more time with these striking species, choosing to undertake golden monkey habituation is a great option. You can tailor this to your gorilla tour Uganda getting a chance to spend four (4) hours in the presence of the golden monkeys and understanding their life.

Since the forest is covered with bamboo, it is not difficult to get good photos. However, a longer lens is recommended as they can be more active and playful so could easily move away from you as you get close.

Just like any safari Uganda, you need to wear appropriately for your golden monkey trekking experience. It is best to wear long trousers, long-sleeved shirt, a hat, light-rain-jacket, waterproof hiking boots.

Other things to carry include a waterproof daypack, enough bottled water with some snacks and of course your camera and all the necessary equipment.

Tourists can also trek golden monkeys on a Rwanda safari to Volcanoes National Park. This 13 Days Uganda-Rwanda Safari is a popular way tourists decide to tailor their trips especially with Uganda wildlife safaris.