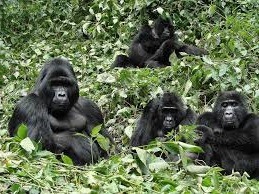 Uganda is endowed with a range of bio-diversity stretching from wild game like lions, leopard, elephants, Rhinos, giraffe, buffalo, Antelopes and zebras to primates like mountain gorillas, Chimpanzees, monkeys and aquatics like Nile crocodiles and Hippos which are always encountered by Uganda safari undertakers. The majority of this bio-diversity thrives in a number of protected areas including ten (10) national parks of which Bwindi Impenetrable National park the home of the critically endangered mountain gorillas is among.
Mountain gorillas are powerful apes that have got common ancestral backgrounds with Chimpanzees and humans. Unlike their counterparts – the eastern lowland and western lowland gorillas that thrive in expanses of lowland jungles of Democratic Republic of Congo and West Africa in big numbers, the Mountain gorillas only dwell in the Virunga massif and Bwindi Impenetrable national Park which contains 400 out of the 880 mountain gorillas that currently exist in the wild without any member thriving in captivity. It is from this basis, that gorilla safaris in Bwindi do not come by serendipity.
Bwindi Impenetrable National park has 11 gorilla families that have been habituated purposely for gorilla trekking encounter. These 11 families are distributed in four regions of Bwindi including Buhoma, Ruhija, Rushaga and Nkuringo. Though these regions have varying terrain and different experiences, they are all accessible and the gorilla trekking is carried out harmoniously. Buhoma in the northern section of Bwindi has three gorilla families including; Habinyanja, Mubare and Rushegura and is normally liked by travellers on Uganda gorilla safaris due to its proximity to Queen Elizabeth National Park, easy connection from Kampala and wide range of accommodation facilities. Ruhija in the eastern section of Bwindi has two gorilla families including Bitukura and Oruzogo. The research group Kyaguriro also thrives in Ruhija sector. Rushaga in the southern section of the park has many gorilla families in the whole of Bwindi. There are 5 gorilla families including; Mishaya, Bweza, Busingye, Kahungye and Nshongi. While, Nkuringo in the western part of Bwindi has one gorilla family called Nkuringo. Nkuringo area offers the most strenuous gorilla trekking encounter that you can ever have in Uganda.
The gorilla region to track is indicated on your gorilla trekking permit and if interested in particular region, it is better to let your booking agent know by the time of making a reservation. Its allocation will definitely depend on its availability as eight (8) are only allowed to trek each gorilla family per day.
Uganda safaris/Uganda safari News
Prime Uganda safaris & Tours Ltd safari News.