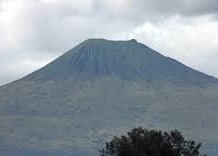 Karisimbi Mountain is the highest  volcano of the eight wonderful Virunga massifs and it also happens to be the fifth highest mountain in the African continent. The volcano which rises at an elevation of around 4507m above sea level is one of the wonders that country Rwanda is proud of and the natural feature deserves visit by any traveler on Rwanda gorilla trekking safaris.
The wonderful mountain Karisimbi is located along the borders between three neighboring countries of Rwanda in the western part of the east African rift valley and Democratic Republic of Congo. Mountain Karisimbi derived its name from the local Kinya- Rwanda word ‘amasimbi” which literally means “white shell”, meaning the white-capped summit of the Karisimbi volcano. It is surrounded by Mikeno volcanoes on the northern side, Bisoke on the eastern part and Nyiragongo on the west direction. The mountain is perfectly located in the famous Volcanoes national park and hence can be hiked by tourists on their Rwanda mountain gorilla trekking safaris.
Climbing Mt Karisimbi is a strenuous but highly paying to tourist who spends the time and resources to hike the mountain. The highly rewarding hike takes around two days for tourist on their hiking safaris in Rwanda to hike to the highest peak of the volcano. The hike begins very early in the morning at around 6:00am and involves visitors passing through the pronounced Bisoke side before reaching the first stopping area estimated to be at an elevation of 3,700 meters above sea level. This is the place where tourists first have an overnight camping before continuing with the hike up to the summit.
Hiking Karisimbi Mountain provides sights and views of various bird species which are found at different altitudes in the mountain. Besides the birds, visitors can also enjoy the views of various primates such as golden monkeys and the famous mountain Gorillas since the volcano is strategic mountain in the primates’ park of Volcanoes national park. The mountain is pronounced for its new species of plants in its four main zones of vegetation, from the dense forest at its base to the barren volcanic core at the peak.
The hike up to the peak of the mountain is characterized of muddy trails which are slippery especially during rainy season, though due to the altitude, it can rain at any time of the day and hence tourists should be prepared.
For visitors interested in hiking the Karisimbi Mountain, they need to be relatively health and experts in hiking because the hike takes tourists through the slippery slopes to reach the summit which is white capped as a result of hail and sleet which accumulate in the higher elevations from its frequent storms. Hiking the mountain requires tourists to hire a porter ($20 per day) to help them carry the luggage.
Karisimbi is also near to the Karisoke research center where the prominent grave of the famous mountain gorilla researcher, conservationist and American zoologist; Dian Fossey was burred after being killed. It implies that interested visitors on their Rwanda Safaris have a chance to visit the grave as well as trek the golden monkeys in addition to the Mountain gorillas.
Rwanda safaris / Rwanda Safari News
Prime Uganda Safaris and Tours Ltd