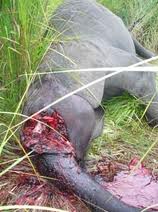 Elephants are greatly attracting many tourists to come for safaris to Uganda and Africa at large, but they have been affected by the killings which are taking place in the whole continent. It’s known that an average number of 45 elephants were killed in 2011in every protected area, and this has continued to threaten the growth of the tourism industry.

The former report showed that over 17000 elephants were killed for ivory; this kind of poaching has greatly costed the tourism sector since a lot of revenue has been lost due to the activities which are taking place in the protected areas.in return this has reduced the number of safaris in Uganda.

These organized criminal networks on the elephants all over Africa are making continuous losses to the tourism sector in Africa and this has greatly bought about reduced safari tours to Africa at large. This has bought about the warnings which have been made to the poachers since their actions are reducing the number of these animals with in the reserves.

The report was prepared and organized by the international union for the conservation of nature and the environmental programmes, therefore it’s important to protect and conserve the elephants from the poachers, and this is because this will help in increasing their numbers  in the parks and also improving safaris in Africa.