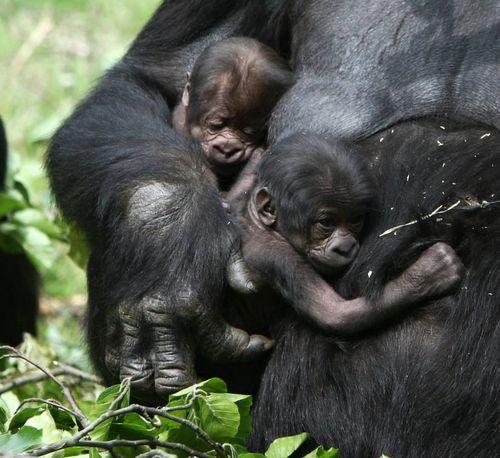 Known for their natural shyness, mountain gorillas had earlier been rated critically endangered on the IUCN Red list until early last year when we’re removed from that list to the endangered list. Not only are mountain gorillas threatened by loss of habitat due to human encroachment, but they have also become victims of human violence. These gorillas were poached to near extinction hence they have every reason to be reclusive. At the moment, there are about 1006 mountain gorillas left on the planet.

Many have been wondering if gorillas give birth to twins just like humans. Gorillas typically give birth to only one infant at a time. Gorilla Twin birth is a rare event in mountain gorillas however, there are gorilla families that have received a set of twins in Uganda and Rwanda.

The birth of the twins is a gift in many ways, first for the pure beauty of nature, but also reminds us how vulnerable and precious gorillas are by just looking at the dedication a mother takes, thriving in such a severe environment with two babies to take care of.

Can a Gorilla have Twins? |How often do Gorillas give birth to twins?

Giving birth to twins is a very rare case among mountain gorillas and even when they are successfully born, they may not last long. Of the more than 270 births that have occurred in the Volcanoes National Park gorilla families over the last 50 years, it is documented that only three Mountain Gorilla twin birth cases have occurred. The first set of twins were born in 1986 and only survived nine days. Other recorded Mountain Gorilla twin birth cases occurred later. A set of twins was born in 2008 however, they died the day they were born as a result of infanticide.

What is the chance of survival for twins?

Since they rarely occur, it’s hard to statistically rate the survival of twins however, we do know that roughly 25% of single infants die during their first year of life and we would expect the rate for twins to be just as high if not higher. According to the Rwanda Development Board (RDB) team, Rwanda has had three sets of twins born and two sets that have survived. 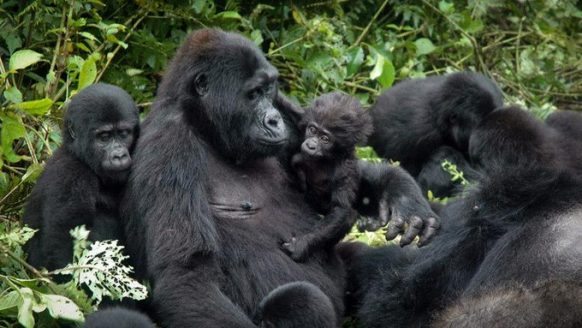 What are the challenges a Gorilla Mother faces? | Mother Gorilla(s) with Twins

Even when you go gorilla trekking to any of the gorilla homes, you will notice that Gorilla mothers are completely responsible for infant care until they are about 3 years of age. Raising twins requires increased energetic demands because gorilla mothers don’t allow other group members to hold or assist in any other way. As these infants age, other group members or the twins’ siblings might help carry them, but this likely will not happen until after they reach one year of age.

Gorilla families that have twins don’t normally walk big distances as mothers usually use their arms to support infants until they are strong enough to grasp on tightly by themselves. So, with twins, mothers are required to use both arms to make sure the infants are secure, which make walking difficult.

Another significant challenge is the weather. There is always one time in the year when these parks and countries have a long rainy season, the damp conditions and cold temperatures put the twins at risk.

There are Gorilla Twin Birth cases in Uganda & Rwanda. There are currently 8 and 4 documented cases of gorilla twining in Rwanda and Uganda respectively in the last 50 years. Because 50% of the Bwindi gorillas are wild unhabituated, there are several twin births that are not reported as they can’t be monitored in the wild unhabituated state. Trackers from Uganda Wildlife Authority have however witnessed at least 3 mothers from wild unhabituated gorillas with twins. This brings the total recorded twin births in Rwanda to 8 and 7 in Uganda. There are however no records of the surviving sets of twins in Uganda. 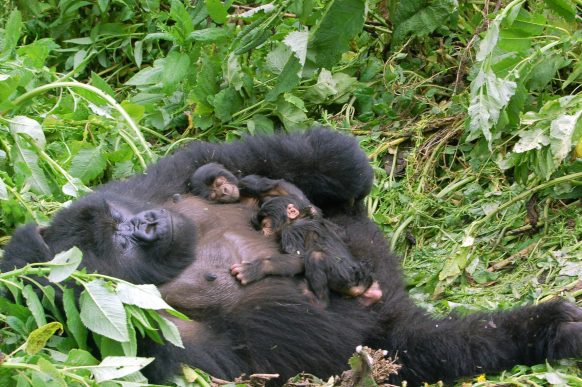 Susa A gorilla group is the first known group to have a set of surviving twins in the history of mountain gorillas according to the documented results. The Mountain Gorilla twin birth cases occurred in May 2004 when Nyabitondore gave birth to two babies who were later named Impano and Byishimo (the male was called Byishimo meaning “joy” and the female Impano, meaning “gift”).

Another twinning occurred in the same group later in 2011 and they were named Impeta and Umudende, although Umudende passed on in 2015 (Impeta “a medal” to signify that the Susa group should be awarded a medal thanks to their status and Umudende, “an award of high value” to signify the same award for the Susa group). Hirwa group is known to have the second ever surviving twins named Isango Gakuru and Isango Gato born to Kabatwa.

One of the most recent Mountain Gorilla twin birth cases in Rwanda’s Volcanoes National Park is when Isaro, a 16-year-old adult female of Isabukuru group, gave birth to two babies. This highly welcomed birth was recorded on 18th January 2016. It is unfortunate that only one of the twins is surviving.

Again, in August 2016, Kalisimbi, an adult female in Amahoro group was spotted with newborn twin babies, but unfortunately, the twins died the following day. The mother kept carrying both dead infants all night but dropped them the following days. The two babies (both females) died of traumatic injuries.

In Uganda, the Nkuringo family in Bwindi Impenetrable Forest National Park was the first gorilla family to record Mountain Gorilla twin birth cases  was in December 2004. One of the twins however died shortly after birth as the mother could not take care of the two infants. The Nkuringo family welcomed this set of twin gorillas from mother Kwitonda, and these were named Katungi and Muhozi. Unfortunately, Katungi died at the age of 1.5 years due to illness.

How many Mountain Gorillas are left in the world?

There are 1006 Mountain Gorillas left in the world. According to the Last year, a census revealed that the population of endangered mountain gorillas has increased significantly in the last 30 years. A survey carried out in the Virunga Massif – where most of the world’s mountain gorillas live – revealed 480 individuals living in 36 groups. Conservationists say that, 30 years ago, only 250 gorillas survived in this same area. Along with the 302 mountain gorillas from a census in Bwindi in 2006, the world population is now more than 1000. 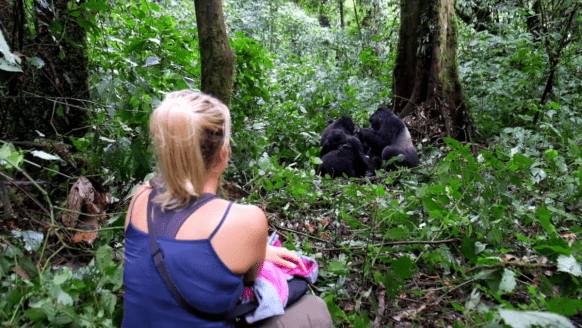 Encountering face to face with mountain gorillas in the jungle is one the most breathtaking and unforgettable experiences for trekkers undertaking Africa safaris. It’s good to experience sitting or standing in silence in the cold forests for over 60 minutes, this is one of life’s greatest privileges that tourists enjoy during their Rwanda safaris, Congo safaris & Uganda safaris. However, planning the destination where to go, when to go and what to pack for this Africa safari tour are important to note before you head for your mountain gorilla trekking safari destination.

There are about 1063 mountain gorillas in existence, and Uganda is proud home half of the world’s remaining mountain gorillas that can be trekked in its two gorilla safari destinations giving travellers on safaris Uganda Uganda gorilla trekking safaris opportunities to observe and interact with these gentle, mysterious primates. Mountain gorillas therefore only live in the dense vegetation of Bwindi Impenetrable National Park and along with the dormant volcanic Virunga mountain range that stretches across Rwanda’s Volcanoes National Park, Mgahinga Gorilla National Park, Volcanoes National Park Rwanda and Virunga National Park in the Democratic Republic of Congo. Since these critically endangered creatures can’t survive in captivity, the only way to see them is by choosing Uganda as your next safari destination for gorilla trekking safari in Uganda up to their natural habitat in the misty cloud forests that have an altitude of over 14,763 feet.