Mpologoma, more to the lion i thought i knew – Uganda safari news 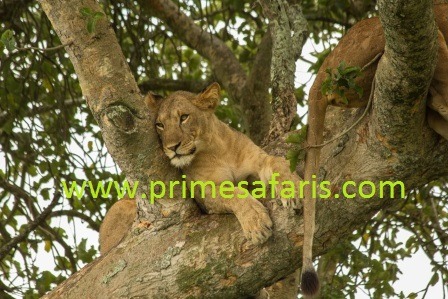 We see him in photos, we watch him on animal channels and programs, we read about him in magazines, we desire to see him; we call him the king of the jungle. We would jointly concur that after humans, the Lion is one of the most famous animals on our planet, a reason why when we take our families to the zoo, we make sure that they get an opportunity to see this magnificent creature. In Uganda, the lion is perceived in very many dissimilar ways by a great number of people as can be discovered during a Safari to Uganda.
The Mpologoma, a name given to this fierce beast by the Baganda (people of Buganda), means a great deal in Buganda kingdom. History has it that King Kintu and his son called Ssebuganda went out for a hunt in the course of which they came face to face with two lions. Surprisingly, Ssebuganda was able to wrestle with the lions and kill both of them using only his stick. On seeing this incredible deed, his father named the stick Luwaga. The two took the lions’ meat and prepared it for a dinner.
When all was ready, they sat down, blessed “Dungu” the guardian of game hunting, and began to “dig in” as the common phrase goes. No sooner had they made a few bites of the lion’s meet than they started vomiting and whining because of stomach complications. Perhaps their bodies were naturally incompatible with lion’s meat. I don’t know whether if offered the opportunity to taste lion’s meat while on your Safari in Uganda; you would take it up without hesitating.
Their stomachs ached so badly that Ssebuganda and his dad the king vowed never to eat lion’s meet again. All their descendants who form the Mpologoma clan of Buganda today are prohibited from eating lion’s meat. The belief is that if they do, they will develop similar or even worse complications.
One thing you will discover while on your Uganda Safari is that all people in Buganda Kingdom belong to a clan each having a totem and some a minor totem which they are not allowed to eat. They therefore guard their totems jealously and this has indirectly helped in protecting these animals from being hunted down.
Interestingly, the rarely seen king of Buganda is called “empologoma ya Buganda”, meaning lion of Buganda, principally because of the authority and might that the baganda people ascribe to their king; authority that is comparable to the lion’s might alone. During Uganda Safaris and Tours, tourists can explore the Kabaka’s (king’s) palace on Mengo Hill in Kampala and will be able to learn about the peoples of Uganda. Make sure that your guide tells you why the King’s Namulondo (throne) sits on a lion’s skin and why the lion’s head was left attached to that skin.
Uganda safaris/Uganda safari News
Prime Uganda safaris & Tours Ltd