The world’s only capital beautified by a wildlife back drop 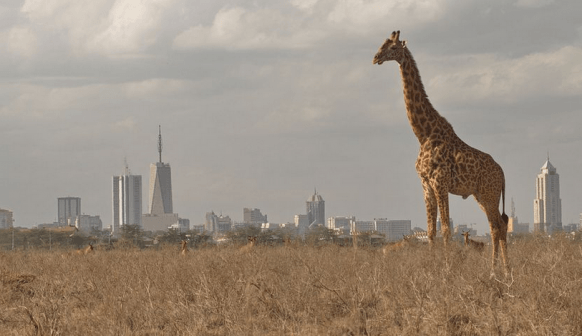 Just a short drive to the southern limit of Kenya’s capital city-Nairobi is the Nairobi National Park. Nairobi National Park is located approximately 7 kilometers (4.3 mi) south of the city center giving Kenya safari tourists the chance to indulge in a pure African safari at the footsteps of the nation’s capital. Its separated from the city by an electric fence in its eastern, northern and western boundaries that keeps the park’s wildlife from the city. The southern boundary is covered by the Mbagathi River. The electric fence that separates the park from the city runs along a highway leaving Jomo Kenyatta International Airport, a fact that makes Kenyans proud as the only natural safari park that has a city scape background seen from almost any part of the park, hosted in their country.

Established in 1946, Nairobi National Park was Kenya’s first designated wildlife park. This was in a bid to control conflicts between wildlife and animals a campaign headed by Mervyn Cowie who was made director of the park till 1966.

What to see / safari attractions in Nairobi National Park 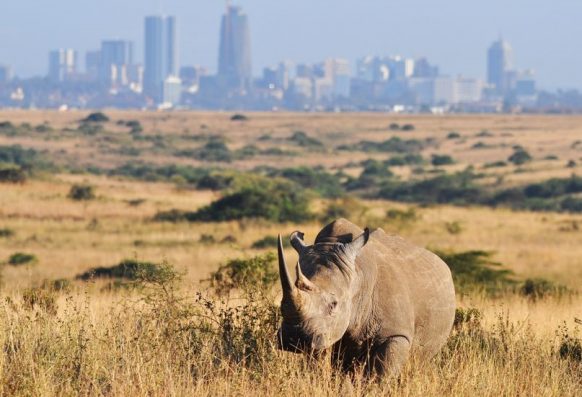 Despite the park’s proximity to the bustling capital and relatively a small size for an African national park, Nairobi National Park boasts a large and varied wildlife population. The wide-open grass plains and acacia bush play host to a wide variety of wildlife inclusive of which are lions, African leopards, cheetahs, hyenas, Cape buffaloes, Masai giraffes, Baboons, Gazelle, Grant’s Zebra, Coke’s hartebeest, Eland, Impala, waterbucks, hippopotamus a reason it is at times referred to as Kifaru Ark, which means “Rhinoceros Sanctuary”(Kifaru in Kiswahili). Nairobi National Park is also Kenya’s most successful Rhinoceros (Eastern black Rhino) Sanctuaries. A safari to Kenya here would be very convenient for short Kenya safari tourists. Tourists can explore the park on a game drive or opt for a safari walk along the walking plains in the area known as Hippo pools.

In the whole of East Africa, 7 kilometers is just a start for the drive to your safari destination but this not so for Nairobi National Park. Break the hustle of getting to see wildlife in Kenya by taking a days trip to the park and see as much wildlife as in other distant parks.