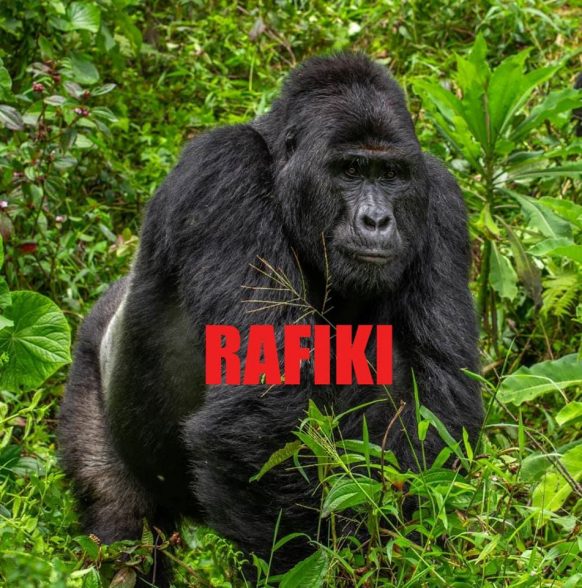 On 1st June 2020, Rafiki (silverback) aged 25, was reported missing in the group by the rangers and on 2nd June 2020, the Uganda Wildlife Authority team mounted a search for the missing silverback gorilla in the forest. Unfortunately, it was found dead and the body was found in Hakato area inside Bwindi Impenetrable National Park.

Nkuringo gorilla family was the first mountain gorilla family to be habituated in the southern sector of Bwindi Forest National Park in 1977 and has been popular with tourists for decades. At the time of Rafiki’s death, the family had 17 members; 1 silverback, 3 black backs, 8 Adult females, 2 juveniles and 3 infants.

Early this week, the Uganda Wildlife Authority personnel arrested four poachers in the southern sector of Bwindi Impenetrable National Park following the death of one of the parks beloved silverback gorilla of the famous Nkuringo gorilla family; Rafiki. The arrest was done after investigations about the cause of its death. The medical personnel after post mortem revealed that Rafiki; the silverback sustained an injury by a sharp device or object that penetrated its left upper part of the abdomen up to the internal organs.

The Team arrested Byamukama Felix, a resident of Murole village situated in Nteko Parish-Nyabwishenya Sub County in Kisoro District. Felix was found with pieces of bushmeat and several hunting devices including a spear, rope snares and a dog hunting bell. These were recovered from his home on 4th June 2020.

After his arrest, Byamukama confessed that he killed the silverback mountain gorilla in self-defence. He says that he had gone hunting in the park with a colleague; Bampabenda Evarist where they came into contact with the group. When the silverback charged at them, he speared it. Byamukama also revealed that he shared some of the bushmeat with Museveni Valence and Mubangizi Yonasi, whom he said were fellow poachers. The Uganda Wildlife Authority team working with the Chairman LC1 of Murole Village; Mr Ngabirano Pascal, arrested Byampenda Evarist, Museveni Valence and Mubangizi Yonasi on June 7th 2020.

The last time a mountain gorilla was killed by a spear was in June 2011, according to the International Gorilla Conservation Programme. But there are signs that poaching in gorilla parks has increased in recent months, as tourism has fallen because of the coronavirus pandemic, the organization said.

All the four suspects are currently detained at Kisoro Police Station awaiting their trial in the courts of law.

The Uganda Wildlife Authority is steadily monitoring the group to ensure it’s ready for tourism when the park reopens to the public.

How do they Know a Baby Gorilla’s Father After it is Born?

Last year, the government of Uganda passed a strict law that imposes tough penalties on poachers who hunt certain threatened species — including up to life in prison. Sprawling over 80,000 acres in southwestern Uganda on the edge of the Rift Valley, Bwindi Impenetrable National Park is a critical refuge for mountain gorillas, which were once on the brink of extinction, according to conservation groups. Besides gorillas, Bwindi Forest is also home to a stunning array of wildlife, including baboons, chimpanzees, elephants and antelopes. It was declared a UNESCO World Heritage Site in 1994, three years after it was created.

The most recent census in 2018 found 1,063 mountain gorillas remained in the wild, according to The Dian Fossey Gorilla Fund. About 459 lived in Bwindi Impenetrable National Park and in the adjacent Sarambwe Reserve in the Democratic Republic of Congo, the fund said. The remaining population lived in the Virunga mountain range of Rwanda and Congo.

Thirty years ago, there were just 240 mountain gorillas in the Virunga Mountains, with an unknown number in Bwindi, the fund said. “Whereas the purposeful targeting of mountain gorillas by poachers is rare, this incident highlights the threats posed to mountain gorillas,” from snares used to trap antelope, attacks from hunting dogs and injuries from spears, said Anna Behm Masozera, director of the International Gorilla Conservation Programme. “Peaceful coexistence is essential to securing the future for mountain gorillas, and is a pursuit which merges law enforcement with dialogue and effective engagement with park neighbours.”

Mountain gorillas are also threatened by political instability, human encroachment and forest degradation as well as by diseases brought by humans such as the flu, pneumonia and Ebola, according to the African Wildlife Foundation.

In 2018, the mountain gorilla was removed from the list of critically endangered species by the International Union for Conservation of Nature, after intensive conservation efforts, including anti-poaching patrols, paid off. 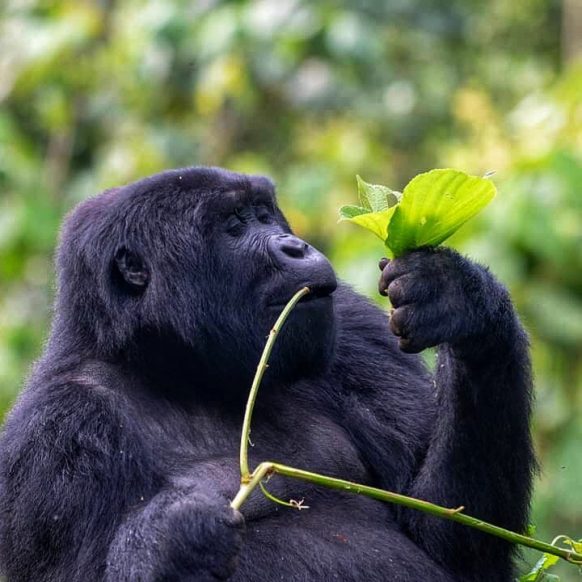 Meeting face to face with mountain gorillas in the jungle the best breathtaking and unforgettable experience you would undertake during your Africa safaris. It’s adventurous to experience sitting or standing in silence in the cold forests for over 60 minutes, this is one of life’s greatest privileges that tourists enjoy during their Rwanda safaris, Congo safaris & Uganda safaris. However, planning the destination where to go, when to go and what to pack for this Africa safari tour are important to note before you head to your mountain gorilla trekking safari destination. There are about 1063 mountain gorillas in existence, and Uganda is proud home half of the world’s remaining mountain gorillas that can be trekked in its two gorilla safari destinations giving travellers on safaris Uganda Uganda gorilla trekking safaris opportunities to observe and interact with these gentle, mysterious primates. Mountain gorillas therefore only live in the dense vegetation of Bwindi Impenetrable National Park and along with the dormant volcanic Virunga mountain range that stretches across Rwanda’s Volcanoes National Park, Mgahinga Gorilla National Park, Volcanoes National Park Rwanda and Virunga National Park in the Democratic Republic of Congo. Since these critically endangered creatures can’t survive in captivity, the only way to see them is by choosing Uganda as your next safari destination for gorilla trekking safari in Uganda up to their natural habitat in the misty cloud forests that have an altitude of over 14,763 feet.

When to go, what to wear & Cost of a gorilla trekking Permit

Gorilla trekking safaris in Uganda Rwanda and Congo start at 8:00 am every morning. Uganda, Rwanda Congo gorilla safaris last between 30 minutes to several hours depending on where gorillas are located that day. Each day, the gorilla family is visited by a group of eight people for an hour. A gorilla trekking permit in Uganda will cost $700 for foreign residents and UGX 250,000 for East African residents. A Rwanda gorilla safari trekking permit costs $1500 for foreign residents and $400 in Congo.To go for gorilla trekking in Rwanda, Congo & Uganda, you are required to dress up appropriately. This includes hiking boots/shoes, rain jacket, long pants, long-sleeved shirts/blouses, sunglasses, hat, and gardening gloves among others. A walking stick and porter are very helpful. Also, remember to carry enough drinking water and energy-giving snacks. Book your Uganda, Rwanda, Congo gorilla safari today and enjoy the magical gorilla trekking tour with Prime Safaris & Tours Ltd, the number one Africa Tour Operator.