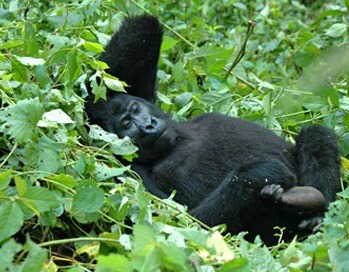 As the Cob web theorem flows, so the Uganda gorilla trekking safari regions of Bwindi could match. Positioned in the northern part of Bwindi, the gorilla safari region of Buhoma has been on the top of the four regions that comprise Bwindi and organize the gorilla tracking activity.
Being the first region to open up for gorilla trekking in Uganda with its habituated gorilla family of Mubare in 1993, Buhoma took advantage of the first accommodation investments and the easier road connection due to its favorable terrain as Kanungu and Rukungiri are not so hilly like the Kigezi highlands of the south. The addition of other two gorilla families of Habinyanja and Rushegura presented a rich gorilla trekking encounter and the perception was held in the minds of the travelers on Uganda gorilla safaris and tours that Buhoma was easy to trek and that one would hardly miss seeing gorillas.
But time has passed, the other three regions have been brought to the lime light with Ruhija standing with its 3 gorilla families of Kyagurilo, Oruzogo and Bitukura, Rushaga with its five gorilla families of Nshongi, Mishaya, Busigye, Bweza and Kahungye and eventually Nkuringo with in Nkuringo family. These regions have got a wider gorilla permit pull especially Rushaga. Ruhija is gaining ground because of good budget lodges that are emerging. So why keep with stress and pressure of Buhoma rushing for its most competed gorilla permits?
Tour operators that organize for the travelers planning to undertake gorilla trekking safaris and tours to Uganda are resorting to either Ruhija or Rushaga to work with less pressure and to give their clients ample time to organize themselves and plan better for the safari other than puting them on haste that gorilla permits are getting finished. The challenge of the south has been accommodation; Chameleon Hill Lodge and Clouds Mountain Gorilla Lodge have covered everything when it comes to Luxury gorilla safari undertakers. Also, the south offers opportunities for viewing the Virungas and the possibility of spending an evening on Lake Bunyonyi after gorilla trekking activity unlike Buhoma in the far north which would require an extended drive.
Therefore, with these, one can speculate that the poles could shift in favor of the south and the vibrancy of Buhoma could be brought to neutrality until the poles shift again just like cob web.
Uganda gorilla safaris/Uganda gorilla safari News
Prime Uganda safaris & Tours Ltd