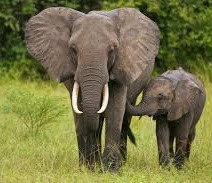 Uganda is gifted with a range of wildlife species including the Big five of Land animals that has always prompted world travelers to undertake safaris in Uganda. These animals thrive in a range of protected areas including National Parks and game reserves.
Uganda has ten national Parks along with good counts of game reserves and wildlife always connect between these protected areas creating wildlife corridors which they use to transit. For example the Uganda safari destination of Queen Elizabeth National Park has got a wildlife corridor that connects to Kibale National Park enabling elephants to always transit between these two destinations. Another wild life corridor exists in the north east of Uganda where protected areas like Kidepo National Park, Pian Upe and Matheniko Bokora Game reserves exist.
It is therefore unfortunate to note most of these wildlife corridors are continually being encroached on by people who wish to carry out their activities like farming. This is a common case in the North east of Uganda particularly Karamoja region. The Minister for Tourism Wildlife and Antiquities Hon. Maria Mutagamba highlighted about the issue by noting that the land pressure in the area in increasing which has prompted the government to hire two consultants to ascertain whether the land in the corridors belong to the locals or not.
The disappearance of wildlife corridors does not only pose a great challenge to wildlife existence as their movements are very significant especially when it comes to search for food. Also to note is that this encroachment is contributing to human wildlife conflict. The animals when attempting to transit and they meet human communities en route may turn hostile and cause danger. This has been reported in areas like Isingiro and the region of Karamoja. The reduction of wildlife means reduced Uganda safaris and tours in the long run.
Uganda safaris/Uganda safari News
Prime Uganda safaris & Tours Ltd