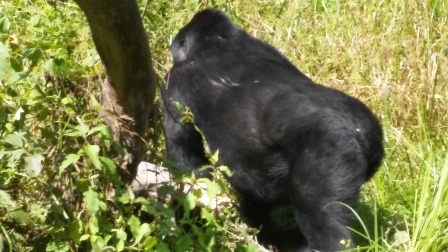 The critically endangered mountain gorillas which are always encountered on gorilla safaris in Uganda and Rwanda are set for counting to ascertain their current population status. The new gorilla census is targeting the Greater Virunga Massif as noted by the Greater Virunga Trans boundary Collaboration (GVTC).
The Greater Virunga Massif which incorporates the Volcanoes National Park in Rwanda, the Virunga National Park in Democratic Republic of Congo, Mgahinga and Bwindi Impenetrable National Parks in Uganda which have for long formed the ground for Uganda gorilla trekking safaris.
The previous census is noted to have occurred in 2010 following other series of censuses that were carried out in 1997, 2002 and 2006. The Mountain gorillas populations were given at 880 as per the last census and close to a half of these were noted to be living in Uganda with 400 in her gorilla habitat of Bwindi Impenetrable National Park which is also a famous destination for gorilla safaris in Uganda.
The exercise is noted to have started earlier but the insecurity in the Democratic Republic of Congo had posed a barrier to it as narrated by the GVTC Programme Manager James Byamukama. However, with the calm that have been registered following the ousting of the M23 rebels, the gorilla census will commence in September starting with the Congo’s Virunga National Park.
The gorilla census is seen as an avenue through which the plans for a sustainable future conservation and matching the trends of the emerging gorilla threats can be ascertained and worked upon. The DNA analysis and fecal samples are noted to be the key method to ascertaining the gorilla numbers unlike the past where they depended on sweep method. The sweep method would see the selected teams traverse the park’s marked sectors walking in a zigzag manner in search of fresh trails of gorillas up to their nests and would then count them. However, this proved inefficient as there would cases of double counting or underestimation at certain points.
The Mountain gorilla populations are noted to have been increasing since 1997 and these sub species of gorilla are differentiated from others by the thick coats that cover them from the coldness of the mount forest habitats where they dwell. Although they feature fewer predators naturally, the mountain gorillas are critically endangered due to habitat loss through encroachment and forest clearing. These Sub species are also prone to accidental hunting when the poachers are looking for wild meat. The snares set in the gorilla forests are sometimes encountered by gorilla trekkers on Uganda gorilla safaris and tours. The mountain gorillas are also affected by human diseases.
Uganda gorilla safaris/Uganda gorilla safari News
Prime Uganda safaris & Tours Ltd