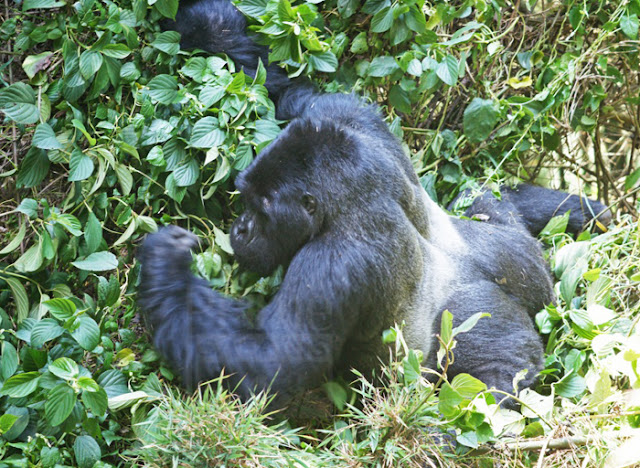 Rugendo Mountain Gorilla family was one of the gorilla families that were habituated first in 1985. It was initially led by a silverback named Rugendo who unfortunately got killed in 2001. Rugendo is believed to have fathered most of the silverbacks such as Mapuwa, Humba, Nyakamwe, Baseka, Ruzirzbwoba, Mukunda, Kongomani, Mburanumwe, Lubutu and Bahati and these silverbacks head various gorilla families in the Virunga region. Rugendo was succeeded by his son Senkwekwe. In 2008, the leadership of Rugendo family saw another silverback named Bukima come to power due to a power vacuum that had been created by the mysterious death of Senkwekwe in 2007. Bukima was a solitary silverback who was formerly a member of the Buhanga group. Rugendo family comprises of 9 members with 3 silverbacks, 1 black back, 1 adult female, 2 sub adult females and 2 babies. This family is found habituating in areas around Mikeno sector in between Bukima and Bikenge therefore a good family to choose for a gorilla trekking tour in Congo when you choose Mikeno Lodge as your accommodation in Virunga National Park.

Munyaga family is led by a dominant silver back called Munyaga who was actually a solitary silverback roaming the jungles of Virunga. In February 1998, Munyaga met Buhanga gorilla family that was under the leadership of an adult female named Nsekuye hence Munyaga imposed himself as the male dominant head of this family taking over from Nsekuye. Munyaga’s family lost all the females of the group due to numerous interactions with other gorilla families such as Kabirizi and this forced Munyaga to abandon as a result of his lack of females to mate with within the family. This in turn created space for the top leadership position which had become vacant after Munyaga’s abdication. Mawazo another silverback in the family stepped up to fill the gap and he now reigns as the dominant silver back of Munyaga family up to today. Munyaga family has 9 members which include 3 silver backs, 2 adult females, 2 juveniles and 2 babies. This family traverses areas around Bukima sector.

Mapuwa family was founded by one of Rugendo’s sons Mapuwa who left his father’s family for solitary life in 1995 at around the same time his brother Ruzirabwoba also left the Rugendo family. In 1998, Mapuwa interacted with the Lulengo family and he managed to annex 2 of its adult females namely Kagofero and Kanepo with whom he started his own family. Over a period of close to 20 years, Mapuwa family has expanded and evolved to reach a membership count of 22 individuals with 3 silverbacks, 3 black backs, 6 adult females, 4 juveniles, 2 sub adult females and 5 babies. During all this transformation, Mapuwa is still at the helm of this family as the dominant silverback making it one greatly led gorilla family to trek on a Congo gorilla trekking tour.

Initially named as Rugabo family, this was one of the 1st gorilla families to be habituated in the Virunga park in 1985 with Rugabo as the dominant silverback, Rugabo’s reign at the helm was cut short only after 9 years at the top when he got shot dead along with 2 other females and an abduction of one of the juveniles in the group named Mvuyekure in 1994, although Mvuyekure was successfully rescued from poachers. The leadership void created by the untimely demise of Rugabo was filled when one of his sons Lulengo stepped up for the leadership position. Being a younger leader, Lulengo family experienced loss of many of its family members due to interactions with other gorilla families such as Rugendo. As of today Lulengo family has 9 members with 1 silver back, 3 adult females, 1 sub adult male, 3 babies and 1 juvenile. 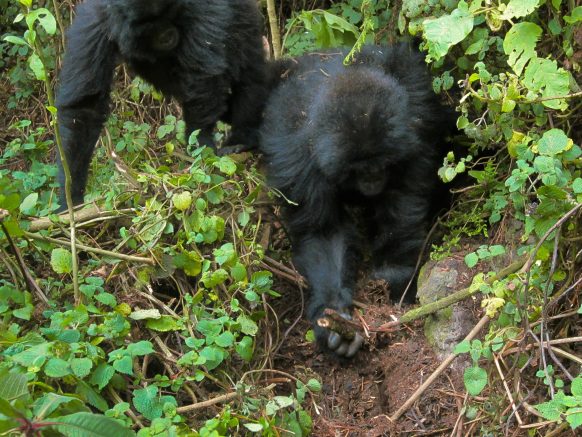 This group was habituated around 1994 and by this time it was under the leadership of Zunguruka as the dominant silverback. Zinguruka later on died from his old age and was succeeded by his son Ndungutse who stay at the top only lasted for a few years as he got fatally shot amidst a cross fire between the Congolese army and a Rwandese rebel group around Bukima patrol area. Following the death of Ndungutse, his son Buhanga took over the reign of the group but he faced stiff resistance from his brother karateka hence they had a bitter stand off after which karateka managed to annex 3 family members but these were soon taken back by Buhanga in January 1998 following an interaction with karateka. This left karateka as a lonely wonderer without any family to belong to. In February 1998, the fight for supremacy continued on when Buhanga had a bitter contest with Kabirizi who was by then a loner silverback. The contest left Buhanga severely bruised but out of sheer power he managed to keep the family stuck together. Buhanga later on succumbed to his injuries which left the family without a dominant silverback to take over the reign; this led to an adult female named Nsekuye to take on the leadership role acting as a dominant silverback to keep the family together. Nsekuye’s leadership was a short spell as she was overthrown on 23rd February 1998 by Munyaga who was a loner wondering the jungles of Virunga. Kabirizi continued interacting with Munyaga until he managed to get back all his females that Munyaga had annexed earlier on, he also had managed to annex more family members from Luwawa family whose dominant silverback had been killed sometime back in1995. This made the Kabirizi family to be so large and as result, the group split into 2 groups on 27th January 2013. Kabirizi was left with 16 members while the breakaway faction led by Kabirizi’s son Bageni left with 20 members. Kabirizi as of now comprises of 19 members with 2 silverbacks, 1 black back, 1 sub adult male, 3 sub adult females, 4 juveniles and 4 infants.

Bageni family was formed when Bageni silverback son of Kabirizi decided to split from his father’s family Kabirizi and form his own family in January of 2013. Bageni left Kabrizi family with 20 individuals including his mother Mapendo and some of his brothers. Over the past few years, Bageni has managed to oversee growth of his family and now controls a family of 26 individuals with Bageni as the dominant silverback, 2 black backs, 10 adult females, 1 sub adult female, 3 juveniles and 9 babies. This family can be seen in Bukima and Gatovu areas

The Nyakamwe family came into existence after split from Humba family which was as a result of internal bickering between Humba the leader of Humba family and his younger brother Nyakamwe. Nyakamwe managed to break away from Humba with 10 family members on the 24th of April 2014 leaving Humba with only 6 members under his control. Nyakamwe now leads a group of 11 members with 2 silverbacks, 1 black back, 3 adult females, 2 juveniles, 1 sub adult female and 2 babies. This family is found in Bukima area of Virunga national park

Humba family was created after a split from Rugendo family in 1998. Humba is a son to Rugendo but he left his natal family with 6 individuals among which was his brother silverback Nyakamwe. By 2014, Humba had grown his family to 16 members but a bitter rivalry erupted between Humba and Nyakamwe after which Nyakamwe managed to break away from Humba with 10 of his family members and started his own group. After a few months, Humba managed to get new members into his family like a sub adult female Kakule left Munyaga group and joined Humba. As of now Humba has 10 family members of which 3 are silverbacks, 2 are adult females, 1 is a sub adult female, 2 are juveniles and 2 are babies. Humba family is located in the Gatovu and Bikenge areas.

Congo gorilla safaris to Virunga National Park are the best way to see Mountain gorillas in West Africa. Planning a Congo safari can be tailored with a wildlife safari in Congo or with any other kind of safari in Congo. Planning to safari Congo can also be customized with other East African trips especially Uganda safaris especially Uganda wildlife safaris, Rwanda tours, Kenya safaris and Tanzania safaris tours.