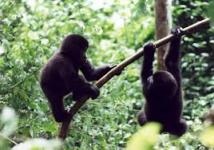 Bwindi Impenetrable National Park is a park in Uganda which harbours a total of 400 mountain gorillas which have attracted many gorilla tracking safaris to Uganda. These primates are social and they live in groups which are led by the males commonly known as the silverbacks, these help their groups in hunting and nesting in the forests.

Kibale National Park is also another famous park in Uganda due to its variety of chimpanzees. The park has attracted many chimpanzee trekking safaris to Uganda which has helped in increasing safari tours. The park also has a variety of wildlife including the elephants, bird species and many others. There are many activities which can be engaged in which include nature walks to the nearby villages and birding in Bigodi community.

Queen Elizabeth National Park is Uganda’s park which is located in the western part of the country. It is a common park in Uganda and it has a variety of wildlife which includes the tree climbing lions at Ishasha sector, the big five like the elephants, leopards, lions, Buffalos and the hippos, kobs and many others. The park has the famous boat cruise which exposes you to water animals like the hippos, crocodiles and the snakes. These have attracted many safaris to Uganda hence the development of the tourism sector.

Murchison Falls National Park has also attracted many Ugandan safaris due to its variety of wildlife and the water falls which have attracted many tourists. The boat cruise on the falls is a good experience which is liked by many visitors.

Lake Mburo National Park is also another famous park of Uganda. It has a variety of wildlife including the zebras which are liked by many tourists. The park has attracted many safaris due to its boat cruise which exposes to water animals which are liked by the visitors.